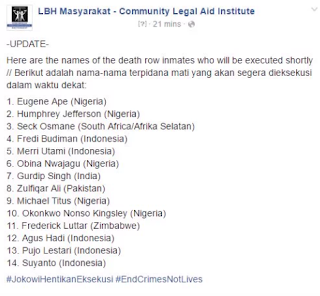 "A violent storm and downpour of rain deluged the site at the moment of execution..." Le Monde, 29th July

That means that to punish someone for the purpose of deterrence is to use the person punished as a mere tool and thus to do him or her an injustice.

This is the main humanitarian reason why many countries in the world have abolished the death penalty.

Once the death penalty was considered a tool to deter future crimes. But because humanity was regarded as the most essential thing in the constitutions, capital punishment was removed.

"As Kant points out, humanity has to be inherent in judicial punishment. It implies that lex talionis (an eye for an eye) is invulnerable to deterrence.

Judicial punishment, therefore, should be a chance for offenders to be humanized or civilized.

Unfortunately, in the case of the death penalty, Indonesia strictly disregards this moral facet by manipulating and criminalizing offenders as tools of deterrence.

The Constitutional Court rejected in January last year yet another attempt to abolish the death penalty in the country, especially in drug and murder cases.

A judicial review of the capital punishment article in the Criminal Code was filed, among others by members of the Bali Nine, a group of Australian citizens sentenced to prison and death for smuggling drugs into Bali in 2005.

Over the last two years, Indonesia has executed 30 convicts, mostly foreigners, for drug-related crimes, defying international calls for an end to the death penalty.

Through the decision the government insisted that the death penalty is the only way to uphold humanity and sovereignty.

Such arguments seem very precarious. One could argue that capital punishment is a shock therapy. Consequently, executions result in shock and or fear of committing a crime and later on a decline in the number of certain crimes.


Execution is a form of murder, which is a crime and contradicts the logic of justice, but for the purpose of honoring the law it is made an exception.
It is because of this exception that the death penalty is legally and morally weak. On the moral side, capital punishment contravenes the values of justice, dehumanizes people and disrupts peace.
On the legal side, the death penalty is a reckless way to justify or institutionalize state crime or murder.
Put simply, we may understand why President Joko “Jokowi” Widodo rejected clemency petitions from many quarters. His refusal appears to have something to do with the constitution, which legalizes the death penalty.
There is nothing wrong with it constitutionally, because as the President, Jokowi has to uphold the constitution and national law.
However, if we accept humanity as the essence of the law, the biggest problem that we should address does not concern Jokowi’s decision, but how to reform the Indonesian legal system in order to transmit humanity."


What an awesome post, I just read it from start to end. Learned something new after a long time.