President Duterte of Philippines initiates a rampage of non-judicial killings 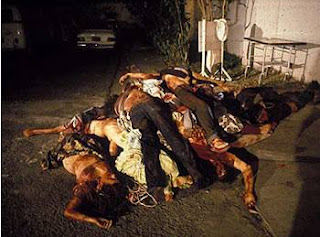 Before dawn on Friday a bullet-riddled body was found in a Manila slum with a sign on it that read: “I am a Chinese drug lord,” local police said.
The murder bore all the hallmarks of an extrajudicial killing, which would make it the first of Duterte’s presidency.
Manila police district deputy director for operations Marcelino Pedroso told AFP the death was being considered a summary execution because the victim was apparently killed due to alleged involvement in drugs. He said there were no suspects.
With Duterte’s encouragement, police had already killed dozens of alleged or suspected drug traffickers in the time between his May 9 election victory and Thursday’s inauguration.