Appearance of a leader countering the slaughter campaign of President Duterte 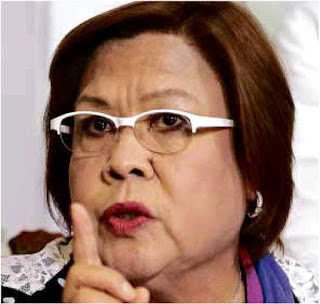 Senator Leila De Lima, former justice secretary and human rights chief, yesterday vowed to remain vigilant as the Duterte administration pursues what is shaping up to be a bloody war against crime and drugs, saying she will be the protector of civil liberties in case of law enforcement excesses.


She started the ball rolling on Thursday when she called for a congressional inquiry into the spate of drug killings and vigilante-style slayings amid Mr. Duterte’s war on drugs. The death toll has exceeded 100 since the President took office on June 30. De Lima emphasized the need for checks and balances among the branches of government, saying this mechanism “assumes a pivotal role in this context, now more than ever.”


“If I see that our Bill of Rights is already being compromised in the course of this campaign, I will not sit idly by and stay silent. Somebody must speak out against any attack on our civil liberties,” De Lima said in a text message. “We cannot allow any diminution of this constitutional precept because it remains to be the only guarantee against abuse of executive power,” she said.


It was with the same gusto that De Lima pursued an investigation into summary executions attributed to the Davao Death Squad, a vigilante purge team to which Mr. Duterte had been linked. Such stance had earned for De Lima Mr. Duterte’s sharp retorts, most notably during the campaign period. In one instance, the tough-talking Mr. Duterte told her to “shut up,” and threatened to file charges against her for the unabated drug peddling at the national penitentiary—an agency under the DOJ—despite her consecutive raids.

“I will always assert the supremacy of the Constitution, especially the Bill of Rights, and the system of
checks and balances in our government,” De Lima said. “I will be doing a lot of balancing act both as an
anticrime and anticorruption crusader and a human rights advocate and defender.”


Based on news item in Philippine Daily Enquirer, 10th July 2016