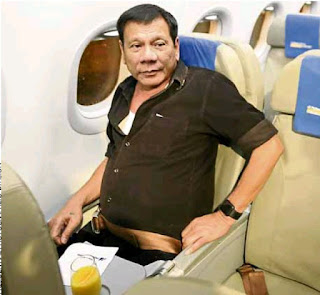 "PRESIDENT Duterte’s war on drugs is spiraling out of control, a top human rights lawyer and opposition lawmakers said yesterday as police confirmed killing more than 100 drug suspects and at least two senators expressed support for a proposed Senate investigation of the killings.
NOT AIR FORCE ONE President Duterte flies economy on board a Philippine Airlines plane on his way home to Davao on Thursday.
“President Duterte’s war on crime has spawned a nuclear explosion of violence that is spiraling out of control and creating a nation without judges, without law and without reason,” said Manuel Diokno, chair of the Free Legal Assistance Group.

Diokno, a prominent law professor, likened the killings to the actions of the late dictator Ferdinand Marcos, accused of killing thousands of dissidents during a 20-year rule that ended in 1986.

Rep. Teddy Baguilat said the President’s rhetoric “breeds a culture of violence and culture of retribution.

But the new chief of the Philippine National Police, Director General Ronald “Bato” de la Rosa, said police should not be cowed by the proposed congressional inquiry.

He said the PNP would solve the country’s illegal drugs problem in three to six months.

The PNP said 103 drug suspects who resisted arrest had been killed, but insisted the policemen operated within the boundaries of the law.

“They put in danger the lives of our police officers who then had to defend themselves,” PNP spokesperson Dionaldo Carlos said"

Thailand already travelled this path; in 2003 up to 3,000  persons were gunned down, without judicial identification or procedure. The claim that such slaughter can solve the problem of drugs is a fallacy, and causes immense damage to civil society. The PNP claim to solve the illegal drugs problem in three to six months is a mirage. The insistence that the police acted in self defence is a tired  worn excuse, clearly false when the various circumstances of the killings are read. For example:

"Mitra was found dead in his backyard with multiple gunshot wounds.

In Sariaya town, Alejandro Sante Umbrete, another suspected pusher, was shot dead by an unidentified assailant in Barangay Talaan Aplaya early yesterday.
Umbrete, according to Sariaya police chief Supt. Alex Dimaculangan, was on the list of drug suspects in Lucena City.

Another drug suspect, Midelito Montealto Chumacera, was killed while he was driving a jeepney by a motorcycle-riding assailant in Barangay Concepcion Uno in Sariaya".  Ditto

These examples surely do not indicate a confrontation with police officers.

Yes, President Duerte may well travel in an economy plane seat, but he cannot claim absolute power of life and death. The protests already raised in the Philippines must be echoed in Asia and throughout the world.

Events in the Philippines and Death Penalty Thailand
The movement for abolition of the death penalty, as well illustrated in the Recent Congress in Oslo, is a worldwide issue. We advance and we fail together. This is especially true of the movement for abolition in South East Asia, ASEAN. There have been few advances in abolition in the region, and the threat of the Philippines to reinstate the death penalty has resonances in other ASEAN countries who are cool to human rights advances in ASEAN member states, but who derive comfort from regressive measures elsewhere which fortify their own dismal practices. It is in this perspective that the Death Penalty in any ASEAN state influences that of Thailand. We follow each others example and plead the cause of common practice according to shared Asian Values, which could and should have a positive connotation but is rather the notorious excuse for the worst of human practice rather than the better.  As member citizens of ASEAN we have an interest and the right to observe and comment on practice in other ASEAN countries. We do not have to wait for unanimous consensus, nor do we neglect the right to comment on the internal practice of other members of the alliance, which mightily  affect internal practice in our own country.