Executions in Indonesia on July 28th 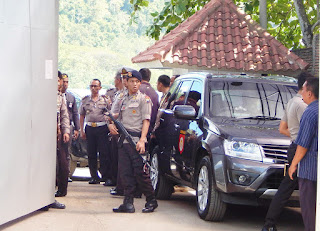 More people have stepped forward to urge President Joko “Jokowi” Widodo not to proceed with the executions because of possible miscarriages of justice.

Pakistani convict Ali has been suffering from the effects of liver damage since May, allegedly the result of torture committed by security personnel during his detention.

According to Ali’s lawyer Saut Edward Rajagukguk, he has been treated unfairly since he was arrested in 2004 at Soekarno-Hatta International Airport for heroin possession.

“It didn’t provide justice to Zulfiqar. In the case, the prosecutor did not seek the death penalty,” Naseem told The Jakarta Post.

National Commission on Human Rights (Komnas HAM) commissioner Hafid Abbas has revealed neglected findings by an investigative team of the Law and Human Rights Ministry between 2002 and 2003.

After thorough examination of court rulings, historical background and field checks in Ali’s home country, the team concluded that the convict may be innocent.

It also recommended then president Susilo Bambang Yudhoyono to cancel Ali’s death sentence and order a further investigation into the case.

“I swear that the work of the team back then was accountable. I am sure that Zulfiqar is innocent,” Hafid said.

He added that then law and human rights minister Patrialis Akbar had submitted a thorough confidential report on the findings to Yudhoyono. “I believe the document is still at the State Palace. It’s worth re-checking to save Zulfiqar’s life. Every life matters,” Hafid declared.

Nigerian Eleweke is also among the death row convicts that reportedly received an unfair trial.

Director of the Institute for Policy Analysis of Conflict (IPAC), Sidney Jones, has submitted a dossier to the Post, containing chronology and evidence that indicates Eleweke may be innocent.

The dossier outlines police procedural violations, including the lack of a search warrant, a signed confession allegedly obtained through torture, as evidence pointing to Eleweke having no connection to the drugs for the possession of which he was convicted.

Eleweke filed appeals in 2004 and 2006 to the Supreme Court, in which key witnesses and related convicts testified that he had nothing to do with the case and was framed by Charles “Kelly” Kanu, a drug smuggler, because Eleweke implemented a no-drug policy and did not allow drug transactions in the restaurant he owned. The court rejected both of his appeals.

Indonesia’s Merri, meanwhile, was arrested by Soekarno-Hatta officials in October 2001 for possession of 1.1 kilograms of heroin.

Tangerang State Court sentenced her to death in 2002, after which she filed a plea to a higher court. But the Tangerang High Court supported the earlier verdict.

In 2003, the Supreme Court also rejected Merri’s appeal, and she had been on death row for 13 years before the Attorney General’s Office (AGO) finally set her execution date for this week.

As the executions are expected in less than 72 hours, Cilacap Prosecutor’s Office gathered legal and family representatives of the convicts and special envoys for document checks. Cilacap Police spokesman Adj. Comr. Bintoro said there would be 1,500 personnel deployed to secure the execution area.

Despite the irregularities in the cases raising questions as to whether the legal processes behind all the convictions were sound, the government has insisted the executions will go ahead.

Vice President Jusuf Kalla said that imposing the death penalty was in the hands of the courts. “The government only carries out the courts’ sentences, which are final and binding,” he said.

See highlighted section in following post. What else is there to say?