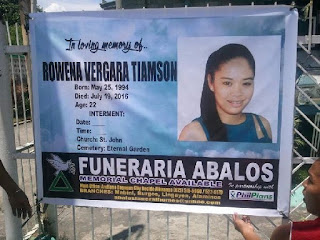 Nothing seems right when an innocent person gets killed.
Last week, vigilante groups identifying themselves as the Dagupan Death Squad and the Pangasinan Death Squad claimed the responsibility for killing six individuals in the Pangasinan area.
However, at least one of the casualties of the vigilante killings does not fit the profile of a drug peddler or a drug user.
A 22-year-old college student named Rowena Tiamson, who was also an active member of a church choir, was shot to death by vigilantes. Her family and friends believe hers was a case of mistaken identity.


The Philippine National Police (PNP) confirmed that Tiamson was not among the people in their "drugs watchlist."
Tiamson was a consistent honor student who was described by her friends as a very kind person. She was supposed to graduate from her Mass Communications course this year.

The inevitable killing of innocents "happens". Mistaken executions occur even under the most developed legal systems. Extrajudicial killings are just criminal killings, without safeguards or even the faulty protection of legal procedure. Who were the killers? Why was Rowena killed? The only certain thing is that she is dead, there is no explanation, no answer to questions, just her body thrown on the wayside.
Posted by hrdefender at 9:26 AM