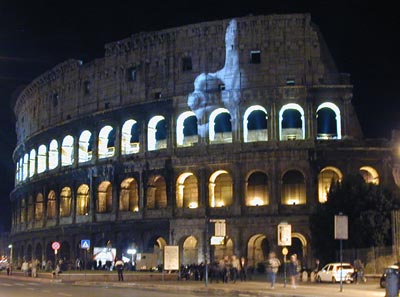 Italy
On 31st December a television station in Rome will transmit a day long programme on the death penalty. Italy is passionately opposed to the death penalty and the first state to totally abolish capital punishment was the Italian Duchy of Tuscany in 1786.
The most striking relic of ancient Rome is the Coliseum where captives were tortured and slaughtered for entertainment. Today, whenever a death sentence is commuted anywhere in the world or any country bans the death penalty the city authorities switch the lights illuminating this ancient monument to gold. One day they will shine in gold for Thailand. Italy, like all members of the European Union, has abolished the death penalty. Hands Off Cain is working for the approval, by the end of 2006, of a resolution for a moratorium on capital executions, established by the UN General Assembly, with view to complete abolition of the death penalty.
USA
New Jersey Senate approves commission to study death penalty.
December 16, 2005: though no New Jersey prisoner has been executed in more than 40 years and the state's death penalty remains on a court-ordered moratorium on technical grounds, the state Senate voted
on December 15 to study the issue and delay any execution until 2007.The recent execution of Stanley ‘Tookie’ Williams has once again brought to the limelight the problem of capital punishment, a practice not only concerning the United States but many other illiberal and authoritarian regimes, first among them being China
which executes approximately 5,000 people every year.
SAUDI ARABIA
Three Saudi nationals beheaded for murder.
December 20, 2005: three Saudis were beheaded by the sword after being convicted of murder in separate incidents, the interior ministry said, bringing to seven the number of beheadings this month.Executions are generally carried out in public in Saudi Arabia, which applies a strict form of Islamic law. The death penalty is meted out for murder, rape, apostasy, armed robbery and drug trafficking.
KUWAIT
Executed man’s corpse displayed.
December 21, 2005: a 21-year old Kuwaiti convicted of the premeditated murder of a compatriot was hanged and his hooded corpse displayed in public. Thamer A. was hanged inside the interior ministry in Kuwait City before dozens of spectators were allowed into the complex to view his body.Justice ministry official Najeeb al-Mulla, who supervised the hanging, said it took the convict 11 minutes to die.
Posted by hrdefender at 11:04 PM