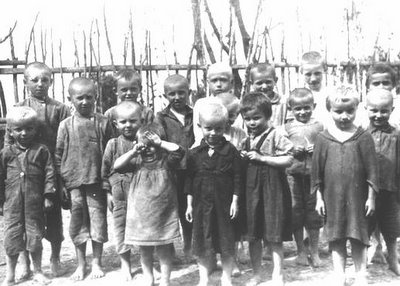 Children just before execution by Nazi SS
Thailand has renounced the death penalty for those who committed crimes incurring capital punishment while under the age of 18 years.
Iran continues to execute juveniles:
IRAN, EIGHT CHILD OFFENDERS EXECUTED THIS YEAR,
December 13, 2005
Iran has executed at least eight individuals who were under the age of 18 when they allegedly committed their crimes, according to a top international human rights group. Amnesty International issued a statement on December 13 saying that it was “outraged” that Iran had recently carried out the execution of another juvenile offender, who was convicted of a crime committed before he was 18 years old. The group highlighted the case of Rostam Tajik, a 20-year-old Afghan national, who was executed in public in the central city of Isfahan on December 10 – “ironically, the day which the UN has marked annually as Human Rights Day”. He was reportedly sentenced to execution for an offence committed when he was 16 years old. On 9 December, Philip Alston, the United Nations Commission on Human Rights Special Rapporteur on extrajudicial, summary or arbitrary executions, called on the Iranian authorities not to proceed with the execution. The Special Rapporteur said, “At a time when virtually every other country in the world has firmly and clearly renounced the execution of people for crimes they committed as children, the Iranian approach is particularly unacceptable”. “Nevertheless, Iran has executed at least eight juvenile offenders so far this year, two of whom were still under 18 at the time they were executed”, Amnesty International said. “The UN Committee on the Rights of the Child, which monitors states’ implementation of the CRC, in January 2005 urged Iran to immediately stay all executions of people convicted of crimes committed when they were under 18, and abolish the use of the death penalty in such cases”.
Posted by hrdefender at 3:00 PM