Execution Is Not the Answer 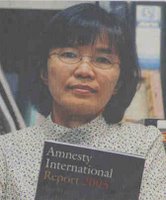 EXCLUSIVE INTERVIEW: ‘Execution is not the answer’
Published on Jan 30, 2006, Nation Newspaper

The recent death sentence imposed on two Thais for raping and killing British tourist Katherine Horton on Koh Samui has re-ignited efforts by human-rights groups to persuade the government and the public that capital punishment is inhumane. Pravit Rojanaphruk talks to Somsri Hananuntasuk, chairperson of Amnesty International (Thailand) and an ardent opponent of the death penalty.
Why are you against capital punishment?
Because it doesn’t address the root cause of crime. I also want to see an end to this violent mentality and the introduction of a real life sentence as a new standard. This could allow [criminals] to think and reform themselves. In any case, it’s acceptable that a criminal spends the rest of his or her life in detention.From a Buddhist perspective, the cycle of karma continues [with the death sentence], though it’s the state doing it ‘legally’. From the Islamic or Christian perspectives, life belongs to God.
Supporters of capital punishment insist that this is the best deterrent against crime.
Statistics support both sides of the argument. Canadian statistics prove that having capital punishment doesn’t reduce serious crime. In the United States, 13 states have abolished the death penalty but not much discussion about it took place. In terms of morality and ethics over the issue, the US is as problematic as China. Even Cambodia has abolished the death sentence.
In Thailand, we’re simply addressing the symptoms, and though capital punishment exists, serious crimes continue unabated. Rapes take place in offices and government buildings, and teachers and monks are involved in rapes too.
Though Thais regard themselves as Buddhists, they are generally supportive of capital punishment. Why do you think this is so?
Because when we talk about the issue, no leaders in our society are coming forward [to argue against it]. Nobody has come out to analyse it from a moral or religious point of view and how it’s against [those points]. Even when convicts are given life imprisonment it tends to be [ameliorated] by the great many royal celebrations that reduce their sentences. That’s why people don’t place much hope in life imprisonment.Even monks are supportive of it. They don’t even look at the first Buddhist precept [that one should abstain from taking the life of another sentient being]. Some monks claim they’re not involved with worldly matters so they excuse themselves from making comments. To my total surprise [while doing research] even famous monks like Phra Payom say drug traffickers deserve to be executed.
How difficult is it to campaign against capital punishment in Thailand?
Very difficult. This is partly because even the religious establishment is not supportive [of the campaign]. Those who oppose it are a silent voice. People like Abhisit [Vejjajiva], Vitit [Muntabhorn of Chulalongkorn University’s Faculty of Law] and [Senator] Kraisak [Chonhavan] who were educated in Europe are against [capital punishment].So far, there’s been no progress and even the media are not supportive. Television newscasters and commentators are supportive of the death penalty and often say, if I were the judge I would order them to be executed too!But we will continue to lobby the government and educate the public.
Why are you different from many other Thais on the issue?
Perhaps because I work in the area of human rights and work for Amnesty International. When I was small I recall being in agreement with the death penalty, especially when it came to rape cases. If debate takes place in society, perhaps there’s a chance for a transformation. Debate surely helps and it can change us.
Posted by hrdefender at 7:43 AM