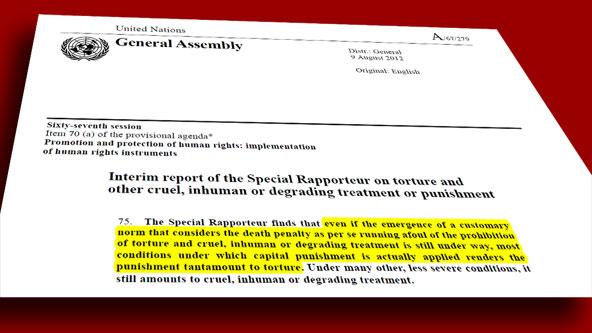 “Considering the death penalty as torture in international law would not be another step, it is the ultimate step to establish that the death penalty is illegal all the time, everywhere and under any circumstance,” Sylvie Bukhari-de Pontual, president of FIACAT (a World Coalition member organisation) told the 5th World Congress Against the Death Penalty.
International jurisprudence, including that of the International Criminal Tribunal for the Former Yugoslavia, considers the absolute prohibition of torture to apply at all times to all states, even those that have not ratified international conventions against torture.
Although United Nations reports have established close links between the death penalty and torture, Bukhari-de Pontual regretted that “human rights bodies are still avoiding this question and talk about ‘cruel, degrading and inhuman treatment’” instead.
Yet Vincent Warren, executive director of the US-based Center for Constitutional Rights (another World Coalition member), left no room for doubt. He said clinical studies of people sentenced to death had demonstrated the existence of a “death row syndrome” including four disorders: sense of helplessness and defeat, sense of diffuse danger, emotional emptiness and loneliness, and decline in mental and physical acuity.
“Each lays the foundation for torture. What else would it take to convince the states that it is effectively torture?” Warren asked.
(From  World Coalition site, see link)

Thailand appears satisfied to achieve a state of abolition in practice, by continuing with death sentences at a rate of one a week, but emptying the cells periodically by Royal commutation of sentence. However, this cycle leaves the condemned for eight to ten years in the state of uncertainty of prisoners condemned to death, in the awful conditions of Bang Kwang prison and with no programme of rehabilitation. For what purpose?
Posted by hrdefender at 12:24 PM