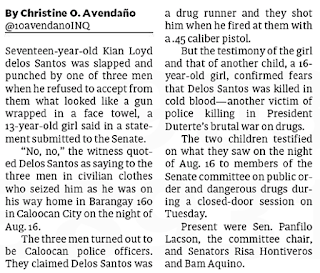 Philippine Enquirer
A news item which spread throughout the world press on the killing of Kian Loyd delos Santos is leading to popular rejection against the Duterte killings. The testimony of the two children is confirmed by observation camera images of police holding and dragging the victim into a laneway. Dressed only in shorts, he could not have hidden the bulky gun from police/ Autopsy of the boy's body showed he had been killed by three shots, one from above while he squatted in a foetal position. Questioned whether they had checked that the victim was indeed involved in the drug trade, police confirmed that after the killing, an informant had provided confirmation.
"It was just one death, among the thousands killed in the Filipino war of drugs. But this particular killing - and the story behind it - have lingered in the mainstream news media and online, in a way that others have not.
It wasn't the Filipino media's reporting, their constant documenting of the killings or their raising of human rights issues that ended up putting police under investigation and the Duterte government on the defensive.
It was pure happenstance, the existence of a single CCTV camera, and the emergence of about two seconds of real-time video that put the lie to the official version of one teenager's brutal killing, that changed the story." Aljazeera, 27th August

"Over 5,000 mourners, many wearing white shirts with the words “Justice for Kian”,  joined the funeral march from De los Santos’ home in Caloocan city, north of the capital Manila.
Thousands more lined the roads that led to a cemetery about 10km away. They waited along sidewalks, and on roofs, staircases, bridgeways and overpasses to catch a glimpse of De los Santos’ flower-draped coffin on a flatbed truck flanked with tarpaulins bearing the words “Run, Kian, Run” and “Stop the killings”." Straits Times, 26th August