Beginning of the end of Duterte 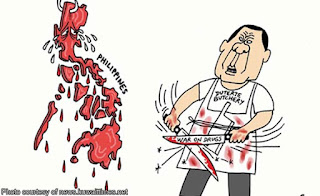 The following action of retreat from his infamous killings labelled as counter drug action, may indicate the beginning of the fall of Duterte. There are strong parallels with the efforts by Marcos to correct excesses that preceded his flight from the Philippines.

"President Duterte has taken his war on drugs away from the Philippine National Police and designated instead the Philippine Drug Enforcement Agency (PDEA) as the “sole agency” that will carry out operations against the narcotics trade.

Mr. Duterte’s move is seen as intended to eliminate deadly police raids that have marred his campaign against illegal drugs, which a survivor and two people whose relatives have been killed by police have asked the Supreme Court to stop for being “patently illegal and grossly unconstitutional.”

Police say they have killed more than 3,800 people during drug operations since the launch of the campaign last year.

They insist the victims put up resistance and the officers involved just defended themselves.

Killing for rewards
More than 2,000 others have been killed by unknown assailants, in what police say could be fights between drug gangs but rights groups believe are attacks by hired guns working for the police or by policemen themselves working for rewards that come with the campaign."
Philippine Daily Enquirer, 12th October