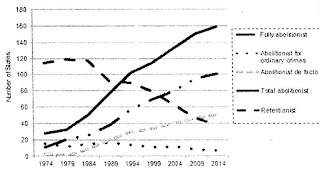 On 16th and 17th October the Ministry of Justice held meetings to mark the occasion of World Abolition of the Death Penalty Day. For the occasion Professor William Schabas, a prominent international legal expert, was invited as the main speaker to comment on progress to abolition, both in the world and in Thailand. On 16th there were separate morning and afternoon sessions, one with the participation of Thai government officials, and the other for representatives of civil society. During the two sessions, participants were asked to note a response to a single simple question,  on whether the death penalty is still needed in Thailand. The response of the government officials was 90% of the opinion that the death penalty was still needed, while the civil society representatives were 100% certain that it is no longer needed. The result could be labelled "The Thai Dilemma".
The figure presented at his talk by Professor Schabas, reproduced above, presents one of the key points of his thinking, namely, that the advance to abolition, and the decline of the death penalty, as shown in the top two curves is inexorable and a matter of time

In a report on the meeting "Nation" newspaper referred to the main speaker as "a foreigner", as if he had just wandered in off the street.
To provide detailed information on the meeting a full document prepared by the Ministry of Justice will be provided.
Posted by hrdefender at 5:38 PM