This website is particularly troubled by the execution of women. The case of Bibi Asia is especially painful as the accusers of the condemned woman are also women. 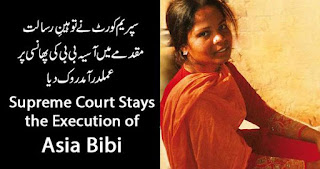 Top Pakistani court stays execution of Asia Bibi, grants new hearing in blasphemy case
Asia Bibi, a mother of five, has been on death row since 2010 after being convicted of insulting the Islamic Prophet Mohammed during a row over drinking water with Muslim women with whom she was working in a field. Blasphemy is a hugely sensitive issue in Pakistan, with even unproven allegations often prompting mob violence, and acquittals in court are rare.


Bibi’s death sentence was confirmed in October 2014 by the High Court in the eastern city of Lahore, the capital of Punjab province where the incident took place. She denies the charges against her and in November appealed against the death sentence. A Supreme Court bench sitting in Lahore yesterday agreed to consider the appeal in detail — rejecting the option to dismiss it.


“The Supreme Court today accepted the petition of my client to appeal against the death sentence confirmation by the Lahore High Court,” Bibi’s lawyer, Saiful Malook. The lawyer said the blasphemy allegation was concocted by Bibi’s enemies to target her and had no basis in fact.


The allegations against Bibi date back to June 2009, when she was labouring in a field and a dispute broke out with some Muslim women with whom she was working. She was asked to fetch water but the Muslim women objected, saying that as a non-Muslim she was unfit to touch the water bowl. A few days later the women went to a local cleric and made the blasphemy allegations.


Under Pakistan’s stringent blasphemy laws, insulting the Prophet Mohammed carries the death penalty, though the country has never executed anyone for the crime. But anyone convicted, or even just accused, of insulting Islam, risks a violent and bloody death at the hands of vigilantes.


Bonded labourer Shehzad Masih and his pregnant wife Shama Bibi were beaten by a mob of 1,500 people then thrown into a lit furnace last year in a crazed reaction to rumours they had thrown pages of the Koran into the garbage.


July 22, 2015   Pakistan’s Supreme Court has stayed the execution of Asia Bibi, and ordered a new hearing on her case. Asia Bibi, a Christian mother of five children, has been imprisoned for six years—including nearly five on death row—after being convicted of insulting Islam. Her lawyers have consistently argued that there is no evidence to support the conviction. Islamic militants, on the other hand, have insisted on enforcement of the sentence against her, and threatened lynching if she is freed. The Supreme Court announced that it would hear an appeal of the Bibi case; a date for the new hearing has not been set. Her lawyers, however, have said that they are confident a fair hearing will result in her acquittal and release.
Posted by hrdefender at 11:49 AM