Executions not a priority: Attorney General of Indonesia

After executing over a dozen drug convicts amid international outrage since January, the Attorney General’s Office (AGO) claims that it has yet to schedule a third round of executions, following the most recent one in April.

Attorney General M. Prasetyo said on Friday that the AGO had yet to discuss the next executions, specifically those of Frenchman Serge Atlaoui and Mary Jane Veloso of the Philippines.
“I have not even thought about it yet. We are focusing on other, more important tasks that need to be completed soon,” he told reporters at the AGO headquarters in South Jakarta.
“We hope that it was clear through the first and second round of executions that we will be firm and not tolerate any drug violations,” said the attorney general.

Both Atlaoui and Veloso were slated to be among a group of death row inmates who faced a firing squad on April 29 for drug trafficking charges. 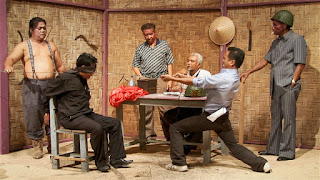 The callousness of Attorney Prasetyo is horrifying; what is the reaction of the two condemned to death when they learn that the state has "more important tasks" to attend to than their execution?
Is this the same attitude that we witnessed in the awful film "The Act of Killing"; has the history of the slaughter of over a million persons in Indonesia left behind this lack of sensitivity to killing?
Posted by hrdefender at 10:19 PM