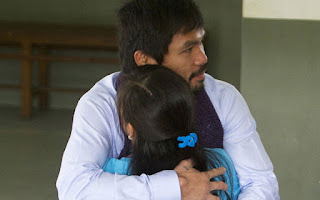 Superstar Filipino boxer Manny “Pacman” Pacquiao fulfilled on Friday his promise to meet death-row inmate Mary Jane Veloso in a Yogyakarta prison. During the visit he reiterated his plea to the Indonesian government to spare the life of his compatriot.

Pacquiao was accompanied by his wife Jinkee Jamora and Philippine Ambassador to Indonesia Maria Lumen B Isleta in his morning visit to the Wirogunan Penitentiary, where Veloso has been detained since late April after the Attorney General’s Office (AGO) decided to postpone her execution.
Later on Friday, Pacquiao and his entourage flew to Jakarta to meet with the leadership of the Indonesian House of Representatives. Meanwhile, Attorney General M. Prasetyo insisted that Pacquiao’s meeting with the House leadership would not affect Veloso’s impending execution. “No, [the meeting] will not postpone her execution. Like I’ve said before, we are waiting for the legal process in the Philippines to conclude. We must respect it,” he said.
Indonesia appears impervious to all reason on a case where guilt is subject to reasonable doubt. However, the Philippine people, united in their support for Mary Jane, are a force to be reckoned with. On a previous occasion in 1995, their anger against Singapore for executing a young Philippine house maid, Flor Contemplacion, caused Singapore to avoid arresting another Philippine women suspected of carrying drugs. Instead they allowed her to board a plane and informed Manilla drug authorities of her arrival, thereby avoiding the anger that would follow a second execution.
(The story is told in "Once a Jolly Hangman" by Alan Sandrake.)
Posted by hrdefender at 10:38 AM