The Decider who Failed 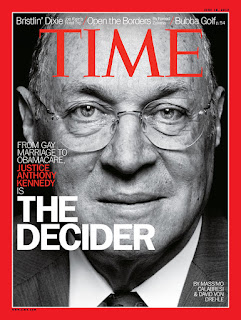 On 26th June the vote of 78 years old Justice Anthony Kennedy was decisive in legalising marriage between persons of the same gender in the US. On 29th June the vote of the same Justice was decisive in rejecting a plea to the Supreme Court to end the death penalty in the US.
The persistence of the US in applying the death penalty, in the company of China, Saudi Arabia, Iran, and Iraq, is one of the human rights mysteries of this world, when countries embracing liberal democracy are foremost in its rejection. Democracy and humanism, including an absolute respect for human life, go hand in hand.
The horror of execution is shown by the choice of method. In the past it was considered necessary that execution would take place with the extreme pain of crucifixion, impalement, burning at the stake, or other monstrous tortures invented to inflict the maximum of pain. But the lust for pain lessened and the search began for a painless way to execute criminals, acknoledging that death was the ultimate penalty, and any accompanying torture was meaningless. In its day, the guillotine was welcomed. In one account it was said that the condemned would feel the blade only like the brush of a feather. Or a criminal was killed by firing squad, mimicking the so called honourable death of a soldier. In recent years lethal injection is chosen as an almost medical procedure to induce eternal sleep. But experience of botched executions, of injections administered by executioners with rudimentary medical training, such as that of Clayton Cockett who died in 45 minutes of obvious torment proved otherwise. We realise today that all our supposedly painless killings are little different from the horrific burning at the stake of former days.
In 1996, 76% of US respondents supported capital punishment; today only 56% agree. Unfortunately, the Supreme Court Justice who supported homosexual marriage, persisted in supporting the death penalty.

Comment: "Thailand is a follower, not a leader", a remark made to me by a Buddhist monk. Decisions made in the US on human rights issues are still considered normative by Thai leaders. It is unlikely that Justice Anthony Kennedy is aware of the far reaches of his vote in influencing weak minded leaders elsewhere. It is a mystery that in a Buddhist kingdom, the prime tenet of Buddhism against killing is spurned. But that is how it is. The decision of a wavering US judge has greater influence on moral decision than the dictate of the Buddha!
Posted by hrdefender at 8:15 PM