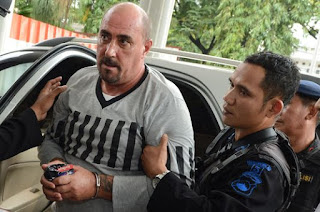 On 22nd June, the Administrative Court of Jakarta rejected the appeal of Serge Atlaoui, a French national, against the death penalty dating from 2007.
A welder by trade he was accused of installing industrial machines in an ectasy laboratory, which he claimed to believe was an acrylic factory. When eight others were executed in April, he was granted right of appeal on the basis that President Widodo had not examined his dossier before ordering his execution.
During the first Asian Congress on Abolition of the Death Penalty in Kuala Lumpur, 11 - 12th June, Indonesian commentators claimed that the recent spate of executions of foreign nationals was motivated by a political agenda of the President, and could not be justified as a deterrent in solving Indonesia's drug problems.
It may be expected that execution will not take place during the month of Ramadan, allowing further representations on a case which has incurred world wide protest.

The UN Human Rights Council rejects the death penalty for drug related cases. One may also argue that the repeated delays amount to unacceptable mental torture of the accused.

Posted by hrdefender at 3:57 PM