Death Penalty in Asia, no steps forward, many steps backwards. 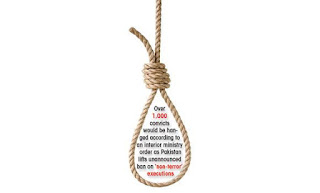 The case of Pakistan: 150 executions in 6 months — Pakistan’s race to kill.


Many may have been offered clemency if they could pay the required bribe or blood money.
Pakistan has executed over 150 people since a seven-year moratorium was lifted on state executions just six months ago. If we continue at this pace, we will quickly surpass China, North Korea, Iran and Saudi Arabia in the number of executions carried out by the state this year. It is not only the pace of executions that is alarming, it is the fact that many of these cases are marred by corruption, torture and a flagrant disregard for international human rights standards.
A recent case was that of Aftab Bahadur, a Christian man who was accused of murder when he was just 15 years old. His confession was extracted after allegedly enduring prolonged torture, which involved being burnt by cigarettes and having his fingernails removed. Aftab Bahadur was hanged on June 10 despite calls by thousands of concerned individuals, human rights organizations, Christian leaders, and even the United Nations to grant him a reprieve. Shafqat Hussain’s story is similar. He was also sentenced when he was a juvenile, and his confession too was allegedly extracted under torture. Shafqat Hussain was arrested along with several others for the same crime. According to reports, while the others were freed after paying a 80,000 rupees (US$786) bribe, Shafqat was not because he did not possess the funds. Doubts about his guilt have led to the postponement of his sentence four times, but he has yet to be exonerated.
While Pakistan is racing to execute people, most of the rest of the world is moving in the opposite direction. In fact, nearly two-thirds of all countries have abolished the death penalty due to the growing belief that it is cruel, inhuman, degrading, discriminatory and ineffective in deterring crime. In the US, where the death penalty exists in 32 out of 50 states but is practiced in only a few, stories of innocent people being sentenced to death periodically surface. The Innocence Project, an organization dedicated to reforming the US justice system, has successfully exonerated over 300 people, some of whom had been sentenced to death, largely through the use of DNA testing — a facility not readily accessible here. In fact, since 1973, 154 people have been freed from death row in the US after spending years in prison because their guilt could not be proven beyond reasonable doubt.
If the US justice system, which many would cite as being one of the most robust, can make so many mistakes, one can only imagine how many wrongful convictions there have been in Pakistan where corruption plagues every level of the state’s structure, particularly the police.
Application of death penalty is inherently flawed, with members of marginalized groups far more likely to receive death sentences.  In the US, you are three times more likely to face execution if you are African American than if you are white. In Pakistan, among the marginalized are members of minority communities some of whom have been sentenced to death for allegedly committing blasphemy. While more Muslims have received the death penalty for allegedly committing blasphemy, minority communities feel themselves at far greater risk because of their religious, caste and class identity. Despite this, many in Pakistan blindly support the death penalty because they believe it deters crime and is sanctioned by religion. Not only does this overlook the countless studies, which prove that states that apply the death penalty do not have lower murder rates, it mistakenly assumes the state acts in a manner that is fair and just. Interestingly, many of those who support the death penalty do not trust the state with their alms or even their tax money due to fears of rampant corruption, but yet they trust it with deciding the gravest of matters — that of life and death.
There are more than 8,000 people who are counting the days till they will be called to the gallows. Many of these people were likely tortured in order to extract their confessions, some when they were children. Many may have been offered clemency if they could pay the required bribe or blood money. Many were probably the victims of some personal enmity on the part of the accusers. Many are mentally challenged or ill. And many more were just the most convenient and vulnerable suspects who could be found at the time.
The state has taken a respite from executions for the holy month of Ramadan. This represents a small window of opportunity for the Pakistani public to reflect on the effectiveness of the death penalty as it is applied today — by a severely broken and corrupt justice system.

Comment: Asian countries tend to be followers, not leaders. We watch each other carefully; when one moves we all move. Above all, this is true of the death penalty. Countries in the region shuffle along, always hesitant to take the ultimate step of abolition. When the Philippines took the unusual step of abolition, the others reflected that the move was influenced by Philippines non-asian adherence to Catholicism. A Thai senator remarked to me, referring to Philappine addiction to asassination killings, that Philippines doesn't need the death penalty as they shoot each other. However, backward steps are more easily taken. Like India, its rejected twin Pakistan had begun a moratorium on the death penalty. And like India, it took the step backwards. Where does that leave Thailand, now approaching a de facto moratorium, the ultimate alternative to choice?
Posted by hrdefender at 4:09 PM