How fast do the wheels of justice turn? 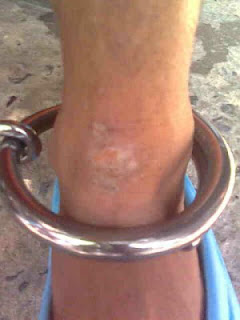 On the same day that a man under the age of 60  is condemned to death in a Thai Court of First Instance, he is shackled. The shackles are welded to his ankles and are intended to remain until his execution or until the death sentence is rejected by a Court of Appeal, the Supreme Court, or by a Royal Pardon. In a judgement made by the Administrative Court such shackling is illegal and prohibited by the Thai Constitution. The judgement has been appealed by the Department of Corrections, three years have passed without a response from the Appeal Court, during which time the prisoner concerned has remained shackled.
In shackling prisoners the wheels of 'justice' turn very fast indeed.
However, when prisoners benefit from a Royal Pardon, the wheels of Justice turn slowly. A recent proclamation of Commutation of Sentence, dated 11th August, allows 90 days for its implementation. Which is hardly intended to mean that a delay of 90 days is mandatory or even advisable. Prisoners are assured by well meaning officials that the shackles will be removed, perhaps tomorrow. Is this extra frustration for a prisoner who has been shackled for years necessary or tolerable?
Posted by hrdefender at 11:59 AM