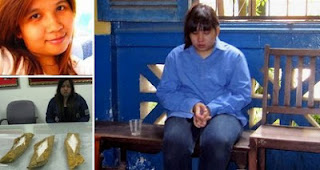 Vietnam's Supreme Court has refused to commute the death sentence of a 24-year-old Thai woman who smuggled narcotics into the country, according to the Saigon Daily.
The Supreme People's Court in Ho Chi Minh City has upheld the lower court's death sentence against Preeyanooch Phuttharaksa, the newspaper said on its website.
Preeyanuch was arrested in October of last year after customs officials at Tan Son Nhut Airport found more than three kilogrammes of methamphetamine hidden inside her luggage. Before her arrest, Preeyanuch had sneaked drugs into Vietnam twice, according to the indictment.
She was handed the death penalty on June 26 by the People's Court and she later appealed to a higher court.
Preeyanuch, a student, had confessed to having been paid 50,000 baht by a Nigerian drug gang to bring the drugs into Vietnam from the west African country of Benin. She had met her Nigerian contact originally at a mall in Bangkok.
Thai officials have said that even if the Supreme Court upheld the death sentence, she could still petition the Vietnamese president for mercy. Vietnam executes criminals with lethal injections, which replaced the firing squad last year.
Statistics from the Thai Foreign Ministry show that about 100 Thai women are currently being detained for drug trafficking in several countries, including China, India, United Arab Emirates, Spain, Brazil and South Africa.
Some of them had married citizens of African countries and were forced to become involved in the trans-national drug trade, officials say.

Discussion 34 : 07/10/2012 at 01:50 PM34
It is surely opportune to point out that according to international law (as interpreted by the UN Human Rights Council) the death penalty may apply only for premeditated homicide, not for drug crimes. Firstly, the Government of Thailand should immediately abolish the death penalty for drug crimes, and then impress the principle on other members of ASEAN. Do it now, and urgently. Then take the responsibility to save our fellow citizen from unjust execution. The death penalty is not the solution to drug crimes!

On this website we have pleaded for clemency in the case of a young Vietnamese condemned to death in Singapore. Now we plead for a young Thai woman in Vietnam. Yes, she is foolish and has committed a criminal act for derisory payment. But she does not deserve to die. And her death will serve no purpose. Yes, confine her in prison; in time send her back to Thailand to serve a further prison term. She will realise the wrong she has done and her life will change.  She has life before her still, and a purpose to fulfill.

Posted by hrdefender at 2:34 PM

Long time reader, first time commenter. Just wanted to say thanks for writing this - extremely
cool! I posted your article on Twitter so my friends could see also.