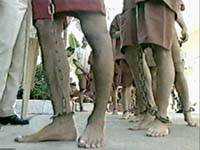 On 29th October 1996 Thailand acceded to the International Convention on Civil and Political Rights (ICCPR) thereby standing with the countries of the world binding themselves to observe just and civilised standards of behaviour. Ten years later continues to ignore and flagrantly offend these standards on many counts.

Article 7 of the Convention defines that “No one shall be subjected…to cruel, inhuman or degrading treatment or punishment.” Binding a human being in chains is cruel, inhuman and degrading treatment and yet its practice continues in Thai jails. This is especially the case in the case of male prisoners condemned to death who are shackled permanently. The shackles are welded in place on the legs of the prisoners and are removed only on the death or pardon of the prisoner.

Consider the reality of the practice. The chains can weigh as much as 5 or 6 kilograms, although a timely bribe may achieve a lighter load. The chain is permanently in place and prisoners must wear only the lightest clothing which can be passed through the small gap between flesh and metal to bath or change clothing. The metal scratches and tears the skin leading to ulceration and infection. Exercise. prescribed as a necessity of humane prison conditions, becomes impossible.

The first time in Thailand that I knew of chaining was on hearing the rhythmic clink of chains and without even looking, I realised what the sound meant, a chain gang walking at the edge of the road. I had thought that such a practice had gone with the disappearance of slavery and the reform of prison systems. That was over thirty years ago. Today you can see men in chains in the corridors of the Bangkok Criminal Court. Where is the presumption of innocence when a prisoner bound in chains appears before a court?

Fierce animals are chained, and even that is wrong. I have seen dogs, elephants, monkeys chained, and men. In all cases it is cruel, in the case of men it is inhuman and degrading. Once a prisoner, who had just arrived in Bang Kwang prison was shackled with chains still stained with the blood of a man who had been executed in the same chains a few hours before.

It is not that is unaware of its contravention of its obligations by the International Convention. The words of the Convention are written into Article 31 of the Constitution of 1997, disgracefully abrogated by the recent military coup; “..any kind of inhumane punishment is prohibited”. In a statement by the United Human Rights Committee in on was again reminded that the Committee “deplored the continued shackling of death row prisoners”. Furthermore, the Committee declared; “THE USE OF SHACKLING AND LONG PERIODS OF SOLITARY CONFINEMENT MUST BE STOPPED IMMEDIATELY”

When asked about the condemned continuation of shackling the Corrections Department recently replied that the prisons are NOT YET READY to fulfil ’s obligations in this matter.

In condemning the practice of shackling UCL is not rejecting punishment. A condemned prisoner must be punished, but not in an inhuman manner. Over 60 years ago the attempted to shackle German prisoners of war on the excuse that had shackled prisoners. as a Commonwealth ally was expected to follow suit but replied with the firm principle that the contravention of the Geneva convention on the treatment of prisoners of war by one side of the conflict could never absolve those on the other side from observing their treaty obligations.

cannot be absolved from its obligations to observe humane norms which it has aqccepted as binding. Do the prisoners themselves object to their treatment. They cannot because has also neglected to sign the First Protocol of the Convention which gives its citizens right of appeal to the UN if their rights are transgressed. ’s accession to the Convention remains an empty gesture both in theory and in practice.

Posted by hrdefender at 2:59 PM