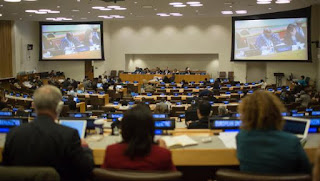 In a two yearly vote on a world wide moritorium on the death penalty, those in favour increase further

Today the international community offered unprecedented support to a UN call to halt executions when the Third Committee of the UN General Assembly considered a draft resolution on a moratorium on the use of the death penalty.
A total of 123 UN member states – the highest number on record to date – voted in favour of the proposal, mirroring recent increases in the number of countries that have abolished the death penalty in law or practice globally.

A minority of countries, 36, voted against the proposal and 30 abstained at the vote. For the first time, Democratic Republic of the Congo, Dominica and Malaysia positively changed their vote to support the resolution, while Antigua and Barbuda moved from opposition to abstention. Equatorial Guinea, Gambia, Mauritius, Rwanda and Seychelles once again voted in favour of the call for a moratorium on executions, after they did not do so in 2016. Only two countries negatively changed their votes compared to December 2016, with Bahrain switching from abstention to voting against and Suriname from voting in favour to abstention.

The increase in the support for the draft resolution offers yet another indication that the world’s direction on the death penalty continues to be in favour of its eventual abolition. Since the adoption of the last UNGA moratorium resolution in 2016, indefinite stays of execution were put in place in Gambia, Malaysia and Papua New Guinea and several other countries have taken important steps to move in this direction. In 2017 Guinea and Mongolia each abolished the death penalty for all crimes and Guatemala became abolitionist for ordinary crimes only. Burkina Faso was the last country to have removed the death penalty from its Criminal Code last June, while Gambia ratified the Second Optional Protocol to the International Covenant on Civil and Political Rights, aiming at the abolition of the death penalty, last September. The weight of the death penalty is carried by an isolated group of countries. In 2017 executions were reported in 22 UN member states, 11% of the total. Of these executing countries, only 11, or 6%, were “persistent” executioners, meaning that they carried out executions every year in the previous five years.
Amnesty International & Comunità di Sant'Egidio published on November 16th, 2018
Posted by hrdefender at 12:42 PM