The condemnation to death of Asia Bibi 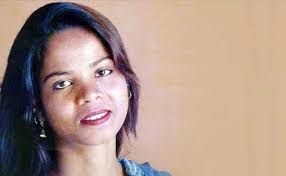 The trial and condemnation to death of Asia Bibi is certainly one of the most horrifying examples of death penalty. She is a Christian Pakistani woman, convicted and sentenced to death by a Pakistani Court in November 2010. The facts of the case have always been subject to fierce debate. Yet, inconsistencies in witness testimonies and fragmented evidence did not prevent the court from securing Bibi’s conviction and from passing the death sentence. In 2014, the Lahore High Court upheld her death sentence. Nonetheless, the execution was stayed in July 2015, when the Pakistani Supreme Court agreed to hear her appeal. It was listed to take place during October 2016. Unfortunately, the appeal had to be adjourned after one of the three judges due to hear the case, Justice Iqbal Hameed-ur-Rehman, recused himself quoting a conflict of interests. Two years later, on October 31, 2018, the Supreme Court handed down the judgement acquitting Asia Bibi. The judgment indicated that the prosecution failed to prove its case beyond reasonable doubt.

The decision of Pakistan’s highest court appears to matter little to the protesters. They have little respect for law and legal procedure.

Obscurity surrounds the case. Despite the acquittal, it was announced that Bibi had not been released, and that in any event, she would not be allowed to leave Pakistan. Then it was announced that she had left for an unknown destination. Clearly, if released in Pakistan she would have been brutally murdered by frantic mobs. Her husband and lawyer, are also trying to find refuge abroad, as are two of the judges who agreed to her acquittal.  Even before the acquittal, Shabez Bhutti, Minister of Minorities, and Salman Taseer, Governor of Punjab, who visited Asia Bibi in prison and argued her innocence were assassinated. The former was murdered by Taliban, the latter by his own bodyguard.
It is clear that forcing Asia Bibi, now 47 years of age, to stay in Pakistan amounts to the imposition of a death sentence, what changes is that the execution will most likely come at the hands of an angry mob, not under the control of the justice system. This prediction is not far removed from reality, protesters are already calling for Asia to be hanged, and a mullah in Peshawar has promised a fortune, 500,000 rupees to anyone who kills her.

While details of the original offense are obscure, it relates to the alleged ritual impurity of a non-Muslim woman in an environment of fanatical religion. What was Asia Bibi accused of?

The trial stems from an argument Asia Bibi had with a group of women in June 2009.They were harvesting fruit in the full heat of the sun when a row broke out about a cup of water. Asia herself describes the incident which took place beside a well:

"I pull up a bucketful of water and dip in the old metal cup resting on the side of the well. The cool water is all I can think of. I gulp it down and I feel better. I...fill the cup again, this time holding it out to a woman next to me...She smiles and reaches out...There is a cry, 'Don't drink that water, it's haram!
'Listen all of you, this Christian has dirtied the water in the well by drinking from our cup and dipping it back in.. Now the water is unclean and we can't drink it"

Prosecutors alleged that in the row which followed, the women said Asia Bibi should convert to Islam and that she made offensive comments about the Prophet Muhammad in response.
She was later beaten up at her home, during which her accusers say she confessed to blasphemy. She was arrested after a police investigation.

Whatever the details, the fault is trivial. What arose in the subsequent verbal brawl cannot be more serious than the alleged uncleanliness. There are photographs of demented crowds calling for the hanging of Bibi. This is certainly not the teaching of the Prophet whose action to save the life of a woman taken in adultery is as striking as an identical event in the life of the founder of another world religion. Such actions strike at the heart of humanity, beyond all laws, religions, legal systems and ethical standards.
Details of the incident are taken from "Blasphemy, the true heart-breaking story of the woman sentenced to death over a cup of water" Asia Bibi, who is illiterate, related the event in secret to a French journalist, through her husband who alone could visit her. Hachette Digital, London 2011
The book reveals her deep devotion to her husband and five children, all of whose lives are in danger. 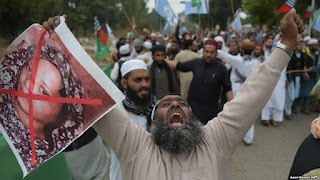 Men call for death of Bibi 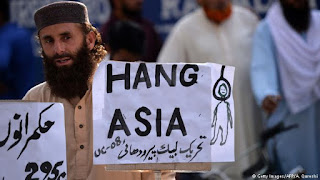 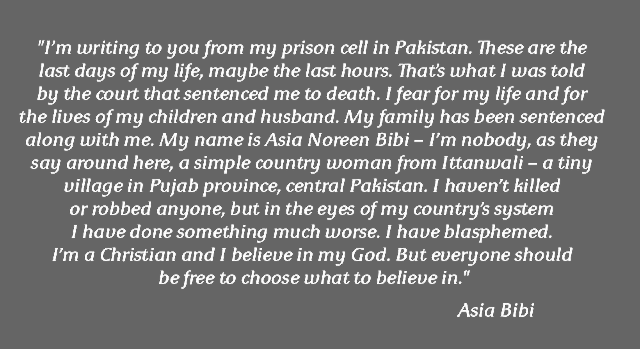 In surat 5 of verse 32, the Koran teaches that anyone who kills an innocent person kills all  mankind, and anyone who saves a life saves all mankind

November 14: A voice of reason
Prominent British Muslims, including three imams - Qari Asim, Mamadou Bocoum and Dr Usama Hasan - have written a letter to Home Secretary Sajid Javidasking him "to make a clear and proactive statement that Britain would welcome a request for sanctuary here" The letter, also signed by MPs from across the political divide, goes on: "We are confident that action to ensure Asia Bibi and her family are safe would be very widely welcomed by most people in Britain, across every faith in our society. "If there are intolerant fringe voices who would object, they must be robustly challenged, not indulged."

November 12: Bibi's lawyer, Saif-ul-Mulooktold the Bild am Sonntag German newspaper that Asia Bibi "would be happy if she could leave for Germany with her family."


Bibi, who was acquitted by Pakistan's Supreme Court on blasphemy charges on October 31, is reportedly still in Pakistan despite her release from jail. Her life is in extreme danger, from frantic Muslim extremists
Mulook fled Pakistan to the Netherlands a day after the court's decision.
Posted by hrdefender at 1:57 PM