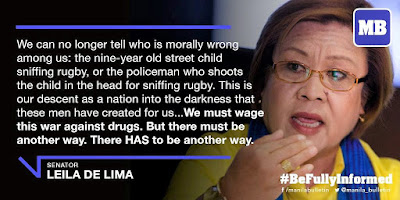 
Extrajudicial killings and Death Penalty: Most Deadly Combination
The death penalty violates the right to life and has often been abused by authoritarian governments and despots to subjugate and terrorize their constituents. Studies have also revealed that state-sanctioned killings mostly victimize the poor and powerless, and thus can never serve genuine justice, not anywhere in the world.
In the Philippines, the Duterte administration is still bent on re-imposing the death penalty, more than a decade after advocates succeeded in lobbying Congress to abolish this law. It’s as if extrajudicial killings resulting from the war on drugs, itself a form of, and even worse than, death penalty, are not enough.


Extrajudicial killings combined with the resurrection of the death penalty will further cheapen life in the Philippines with the poor and marginalized as the major casualties. The previous imposition of the death penalty in the country has shown that most of those meted death sentences were those who could not afford quality legal representation. Same with this administration’s war on drugs where most victims are lowly users and small-time pushers slaughtered in slum communities.
As if the more than 13,000 drug-related deaths are not enough, this regime wants to kill more, still from the lowest rungs of Philippine society through our defective judicial system that favors the rich and powerful such as Enrile, Arroyo, Napoles, Estrada, the Marcoses and, most recently, former Governor Joel Reyes of Palawan. And while this regime has been targeting the poor, it has abetted the exoneration of these influential suspects charged with extraordinary and heinous crimes.
What this aspiring dictator is doing has trampled on people’s basic rights amid a state of impunity, discrimination and senseless violence. The EJKs and the threat of the death penalty are obviously meant to intimidate and sow fear among Filipinos while those in power plunder the nation. But we will not be silenced, the fight will continue!
Death Penalty Thailand is grateful to Senator Leila de Lima for providing us this statement on one of Asia's major abuses of the right to life. Leila de Lima has now been imprisoned in solitary confinement for one year. A protest has been made by FIDH, the International Federation for Human Rights:
“Senator de Lima’s arbitrary detention is aimed at silencing her and intimidating other lawmakers and government critics from speaking out against the brutal killings that have been carried out as part of President Duterte’s ‘war on drugs.’ She should be immediately released and all charges against her dropped,” said FIDH Secretary-General Debbie Stothard.
Posted by hrdefender at 2:34 PM