Restoration of Death Penalty in Philippines? 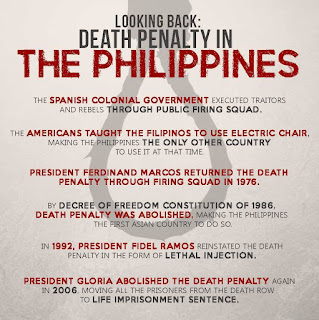 Proponents and opponents of the bill restoring the death penalty are poised to begin their showdown on the House plenary floor next week.

“We expect that the fireworks on this revival of capital punishment will commence on Tuesday or Wednesday next week,” said Albay Rep. Edcel Lagman, leader of the “Magnificent 7” independent minority bloc.
He said he was told by Majority Leader Rodolfo Fariñas of the change in schedule. Speaker Pantaleon Alvarez earlier announced the plenary debates would begin this week.
At a press briefing, Lagman reiterated his call on the House leadership “not to insist on a party or a pressure vote.”
No justification
“House members should be allowed to freely exercise their conscience and conviction in voting on the measure,” he said.
Lagman said he wished to dispel the impression that the 1987 Constitution prescribed the death penalty. “On the contrary, it prohibits it,” he said.
“As of now the proponents have failed to make any justification on the death penalty. They are citing that incidents of crime have risen in recent years. That is incorrect. PNP (Philippine National Police) data show there is a decreasing incidence, except for murder,” he said.
Posted by hrdefender at 9:53 AM