Another Day in Philippines

Two lives are worth only two bullets 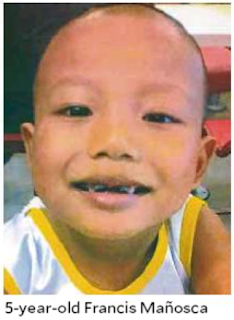 44 year old Domingo Manosca, a pedicab driver, had already surrendered to police under the government anti-drug campaign.
He was fixing a DVD player inside his house on 11th December when someone knocked on the plywood window of his house. When Manosca asked who it was, the gunman fired through the plywood panel. The bullet struck in the forehead of his four year old son who was asleep on the floor next to his mother and two siblings.
A second bullet hit Manosca in the neck, exiting through his cheek and killing him. His wife said he was not a pusher although he used "shabu" (methamphetamine hydrochloride) to stay awake and work longer hours.

Philippine Enquirer, 10th January
Posted by hrdefender at 11:27 AM