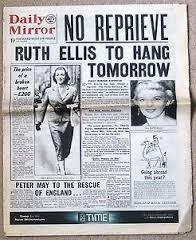 The execution of women is an atrocious affair. Most of us have experienced the protection from injury given us by a woman when we were children. An urge to protect women, the source of life, is deep in the human psyche. And yet women are executed, of course by a male executioner.

Consider examples;
Ruth Ellis, the last woman to be executed in England, was hanged on 13th July 1955. She was 28 years old and night club entertainer. She had been abused and beaten by many men. Finally, after an abortion induced by a kick to her stomach by a ‘lover’, she took a gun and shot him dead. She confessed the crime, was condemned to death, and despite many appeals for her life from throughout the world, England’s most efficient hangman broke her neck only ten seconds after she entered the execution chamber;
Raymond Chandler, a famous American crime writer wrote:
“This thing haunts and, so far as I may say it, disgusts me as something obscene. I am not referring to the trial, of course, but to the medieval savagery of the law. I have been tormented for a week at the idea that a highly civilised people should put a rope round the neck of Ruth Ellis and drop her through a trap and break her neck. This was a crime of passion under considerable provocation. No other country in the world would hang this woman.”
Revulsion against the hanging of Ruth Ellis raised the question “Should a woman hang?”, and, logically, the further question “Should anybody be hanged?”. Ten years later the answer became a clear “No”. In 1965 the death penalty in England was suspended, and abolished for ever after another five years, when it was confirmed that the absence of the death penalty did not affect the murder rate.

Posted by hrdefender at 5:32 PM