Singapore and the Death Penalty 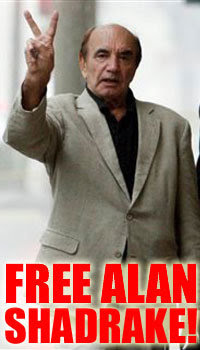 The government goes after the author of a book questioning the fairness of the courts; Jakarta Globe, October 18, 2010

This week the Singapore government is taking on a 75 year old British author for publishing a book arguing that the country's secretive but mandatory death penalty for drug trafficking is unevenly applied against poor and marginalized defendants while the wealty or well connected are spared.

If the past is any precedent, Alan Shadrake, who wrote 'Once a Jolly Hangman: Singapore Justice in the Dock' and had the bad judgment to go to Singapore to publicize the book, can expect to be jailed for "scandalizing the judiciary".

The opening argument was made by a deputy attorney general, Hema Subramania. The Civil Division lawyer focused on 14 passages from Shadrake's book, arguing that "insinuations and imputations contained in these 14 statements constitute an attack to

on the entire judicial system in Singapore". She argued that the very title of the book contained an "underlying insinuation" that "Singapore judges have been guilty of misconduct and deserve to be judged".

In response, the defence lawyer, Ravi, argued that the "serious minded and compassionate" book had to be considered as a whole. "Only by reading the book by its entirety can one properly determine how a reader would understand and interpret the selected quotations", he said, adding that analysis of the judiciary was "a public duty to civil society"
The prosecution raised the issue of whether the content of Shadrake's book was true, an intriguing tactic since truth is not a defense to a contempt charge, but a judge can allow a defendant to argue issues voluntarily injected by the prosecution.

In discussing whether Shadrake had engaged in fair criticism, Subramaniam alleged that there was not "an iota of truth in any of the statements or allegations in the respondent's book". Ravi characterized the Singaporean government's response to his client's book as "somewhat hypersensitive".

Singapore, whose justice system has been heavily criticized for its political bias, has never lost a case like this, and unless something totally unexpected happens, it won't lose this one. In that regard, Shadrake's trial highlights not just the controversy over Singapore's use of the death penalty against traffickers in minute amounts of drugs, but the broader issue of freedom in speech in a city state where sticking your head up is an invitation to get it shot off.
A wide range of human rights groups say the Singapore courts are used as a tool to silence critics. Any political or press criticism of the government results automatically in defamation suits that have been unanimously won by the prosecution and fines and charges that have bankrupted the opposition and sent major news organizations scrambling for cover.

In July 2008, the International Bar Association issued a 72-page report concluding that “Singapore cannot continue to claim that civil and political rights must take a back seat to economic rights, as its economic development is now of the highest
order. In the modern era of globalization, isolationist policies and attitudes are no longer tenable.”

For his part, Shadrake remains defiant. For his first hearing in the High Court, he entered the building holding up his fingers in a V for Victory salute and shouting “Freedom and Democracy for Singapore.” The government has since backed away from the criminal defamation charge, although it hangs in the air as a threat, and Shadrake was charged with a species of contempt of court called “scandalizing the judiciary,” in other words, writing something that could make the court system look bad.

In the months since his arrest – his passport was confiscated, marooning him on the island – he has been granting interviews, basking in his demi-celebrity, repeatedly reiterating his intent to fight the charge and undergoing an angioplasty for a blocked aorta. While the Singaporean government has offered Shadrake leniency if he would purge himself of the alleged contempt by apologizing, he has so far refused to do so.

He is being defended by perhaps Singapore’s most prominent defense lawyer, M Ravi. Sometimes, it seems that the defendant in every high-profile death penalty or free expression case in the city-state is represented by M Ravi. That is close to the truth. For a nation with a population of more than five million, Singapore has a tiny number of lawyers, about 3500. Critics argue that young Singaporeans don’t enter the law because they see the profession as a closed shop in which a handful of loyalist firms land the lucrative government contracts and litigation work; others, including Singaporean leader Lee Kuan Yew, bemoan a general lack of local legal talent. Many Singaporean lawyers seem reluctant to represent clients in politically sensitive cases. It is not advisable, lawyers say, to practice any kind of law that brings lawyers into conflict with the government.

That can’t be said about Ravi. In the last decade, he has represented death row inmates Vignes Mourthi and Shanmugam Murugesu, whose appeals were unsuccessful, and Yong Vui Kong, whose appeal is pending. It was Mourthi’s case that formed a major part of Shadrake’s book. Shadrake charged that Mourthi, a 23-year-old Malaysian, was convicted on the basis of a handwritten transcript of a conversation with an undercover officer. However, the officer faced allegations of rape, sodomy and bribery at the time he testified against Mourthi, and subsequently was jailed for 15
months on bribery charges. Those charges were kept from the court.

Ravi has an aggressive and somewhat discursive courtroom style that can yield dividends. In the Yong case, Ravi backed the government into a corner, forcing it to admit that the President of Singapore does not make an independent judgment on clemency petitions but merely executes the will of the Cabinet.

David Chong Gek Sian, the prosecutor, is not the usual hard-bitten career prosecutor from Central Casting. Rather, he looks and acts like the mild-mannered law professor he was. The man who will be leading the charge to imprison and fine Shadrake is not a criminal law lifer. After obtaining his law degree from the National University of Singapore and a master’s from University College London, Chong worked in a private civil practice for about five years before accepting a post at NUS. His academic
publications focus on maritime and arbitration law. During his years in the Attorney-General’s Chambers, he has worked in various policy positions as well as the Internal Affairs Division.

Chong is currently posted to the Civil Division, and contempt cases are,technically, civil rather than criminal actions. He has won before, in recent years successfully pursuing the Wall Street Journal Asia on a similar charge, resulting in yet another judgment against the paper and its editors as usual.

Justice Quentin Loh Sze On is hearing the case. Alan Dershowitz, the outspoken criminal defense attorney and Harvard Law School professor, has stated that he would rather defend a client before an old judge than before a new judge. In Dershowitz’s opinion, an old judge is more likely to rule fairly while a new judge is too concerned with promotion and the potentially career-debilitating impact of freeing an unpopular defendant.

Quentin Loh is a very new judge. He was appointed a judicial commissioner in September 2009, and was promoted to Judge of the High Court less than six months ago. The Shadrake trial is his first high-profile case with political implications, and it will be absorbing to see how Justice Loh handles the myriad evidentiary and procedural issues which Ravi will raise.

Justice Loh’s background is similar to the prosecutor’s. After obtaining a degree from NUS, Justice Loh spent much of his career in private practice specializing in construction, insurance and arbitration. Prior to his elevation to the bench, Loh was a managing partner of Rajah & Tann, the establishment law firm which has represented many of Singapore’s most important government-linked corporations, including SingTel and the real estate unit of GIC, the sovereign wealth fund chaired by Minister Mentor Lee Kuan Yew and his son, Prime Minister Lee Hsien Loong.

Under Singaporean law, there is no right to a jury. Loh will make the ultimate decision of guilt or innocence and, if he finds Shadrake to be in contempt, will determine the sentence. Consequently, despite the fact that the courtroom this week will be packed with lawyers, clerks, security and reporters, it could be said that Shadrake and his defense team will be performing for an audience of one.

That is not quite true. Justice Loh will be performing for his own audience, headed by Lee Kuan Yew, Lee Hsien Loong, and a cast of cadres hanging about the Istana.
Posted by hrdefender at 10:54 AM