History Lesson: The Guillotine in Vietnam 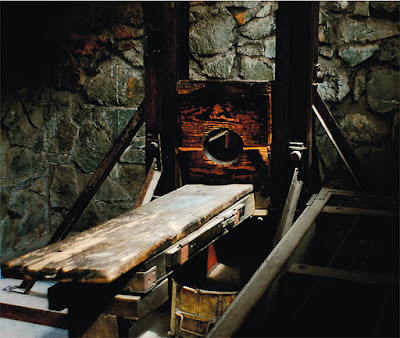 Then...
Rusting in a war museum in Ho Chi Minh City's humid, tropical air, the guillotine was imported to Vietnam by French colonialists in the early 20th century.
GRUESOME: Prisoners had to lay face down, with their head slid through a wooden neck clamp, which can be seen on the guillotine displayed at The War Remnants Museum.
Another guillotine, also abandoned by the defeated French, is in Vietnam's northern capital, Hanoi. With hands tied behind their back, each victim was forced to stand, facing a wooden plank, and was then strapped against it. The plank would then be turned horizontally to form a bench, thrusting the person face down so their head could be slid through the guillotine's wooden, two-part, vertical lunette neck clamp.
If not blindfolded, they could stare into a wooden "zinc head tub" bucket, or wicker basket, into which their head would soon drop. The bucket was shielded by a wooden screen to contain any splashing blood.
The guillotine's looming 4.5-metre-tall frame consists of two upright beams, about 38 centimetres apart. To perform a beheading, an executioner stands next to the frame and releases a metal lever allowing a spring-pincer, at the top of the guillotine, to release the heavily weighted, slanted blade.
In the blink of an eye, the 50-kilogramme, razor sharp diagonal steel blade descends, with the speed of gravity, inside a two-metre-long greased track. The detached head falls forward. The blade simultaneously hits two shock-absorbing metal springs, embedded in each side at the base of the vertical frame, to protect the guillotine from the force of the impact, resulting in a few post-chop bounces of the blade.
The executioner could then choose to hold up the head by its hair, and show it to onlookers. The decapitated body would be rolled off the bench and into a long, rectangular, wicker or cane body basket situated alongside the guillotine.
The basket was usually lined with flattened zinc, sprinkled with blood-absorbing sawdust and capable of holding four bodies.
A dangling rope, permanently looped over a brass pulley at the top of the guillotine's frame _ and attached to the top of the blade _ was then pulled, slowly hoisting the blade for the next kill. The guillotine is portable, designed to be disassembled.
Bangkok Post, "America and the Guillotine", 19th September 2010

And Now...
Executions: Condemned criminals are taken before dawn to a desolate site, read the court’s verdict, offered a bowl of noodle soup and a cigarette, and allowed to write a last letter home.
Then they are tied to a wooden pole, gagged with a lemon and blindfolded, and shot by five policemen. The commander then fires a last “humane shot” into the convict’s ear. According to reports in the official press, many policemen suffer trauma after completing their duty as “executioners”.
....
Statistics on the number of death sentences and executions are not made public. Indeed, following criticisms by international human rights organisations, in January 2004, Vietnam adopted a decree classifying death penalty statistics as “state secrets”. According to the Vietnamese and international press, at least 100 people are executed each year in Vietnam. In 2007, 104 death sentences were pronounced, including 14 women. In 2010, the official legal magazine Phap Luat (Law) reported 11 death sentences for the month of January alone.
"Vietnam: from 'Vision' to Facts", FIDH/VCHR September, 2010
Posted by hrdefender at 7:07 PM