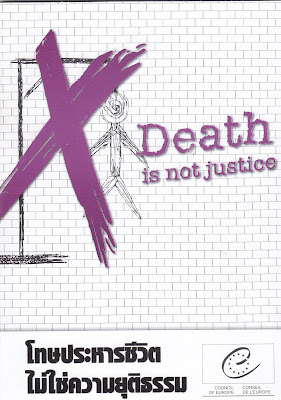 The newly proposed Government five year plan (2009-2013) on human rights includes abolition of the death penalty, and promises a parliamentary debate on the issue. Members of parliament are little informed of the issues involved and it is certain that there will be strong opposition; both the Ministry of Justice and the Interior Ministry favour the Death Penalty.

This development poses a new task to those engaged in the movement for abolition, to make available to political parties and parliament, a summary of the arguments for abolition, from the point of view of political leaders. Following the recent participation in a seminar on the death penalty and drugs, of a notable Council of Europe spokesperson for abolition, Dr. Renate Wohlwende, we have become aware of the great achievement of the Council in abolishing the death penalty over the whole of Europe. We have translated into Thai and will make available to all members of parliament a small Council of Europe booklet which draws on the wide experience of the Council in answering questions and of pointing a way to abolition.
The following is a newly written forward introducing the booklet to the intended readers:
Forward
Soon, the death penalty will pass. Slavery too came to an end; today, it is inconceivable that individuals could own, buy and sell, other human beings. At present, we are striving to rid the world of torture. Slavery, torture, the death penalty were, each in turn, considered essential to uphold human society.
First, some enlightened persons realized that such practices were profoundly wrong. Then one country after another abolished them, while others fought a rearguard action, insisting on their ‘right’ to have slaves, to torture, and now to execute criminals.

The Council of Europe, its 47 nations being the largest regional association on earth, has been overseeing the passing of the death penalty which is now rejected by all its members. Throughout the years it has accumulated wisdom and experience in answering the worries of those who fear the transition to abolition from a practice as old as history. In this short booklet answers are proposed to all the questions and objections which have been raised. It offers arguments for leaders to ponder themselves and to propose to their citizens. The task is great, and is often aggravated by concealment in the past of facts and numbers relating to executions. Besides, the time is short. During the 2010 World Assembly for Abolition of the Death Penalty, held in Geneva, it was predicted that, based on the current rate of change in world opinion, the death penalty could end by the year 2015. The time coincides with that of the Second National Human Rights Plan for the promotion of human rights announced by the Royal Thai Government and which proposes abolition of the death penalty. It is time to explain to Thai people why the step to abolition is a step owed to human dignity. This modest booklet provides the essentials of that lesson.

Union for Civil Liberty
Posted by hrdefender at 3:03 PM