Thou Shalt Not Criticise Singapore 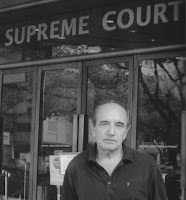 Author critical of Singapore is arrested

Singapore police arrested a British author on Sunday, a day after he launched a book alleging double standards in the city-state's use of the death penalty.

Alan Shadrake, who wrote the book "Once a Jolly Hangman: Singapore Justice on the Dock,'' was detained on charges including criminal defamation and contempt of court, police said in a statement.

Shadrake's arrest came a day after the launch of his book, which contained an interview with Darshan Singh, the long-time chief executioner at Singapore's Changi Prison, who has since retired.

The book also features interviews with local human rights activists, lawyers and former police officers on various cases involving capital punishment in the city-state, which carries out the death penalty by hanging.

In Singapore, the death penalty is mandatory for murder, treason and drug trafficking, among other crimes.
Posted by hrdefender at 8:30 AM