Once a Jolly Hangman 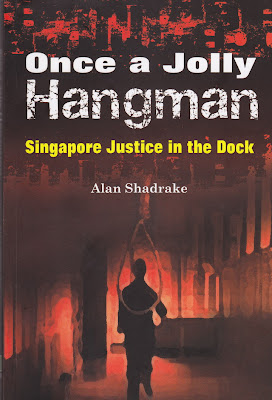 Singapore Justice in the Dock: Alan Shadrake, SIRD, Petaling Jaya, 2010
In November 2007 the United Nations General Assembly approved a world wide moratorium on the death penalty by a two to one majority. Singapore put itself at the head of the minority who voted against the moratorium, declaring its right to execute and that the death penalty was necessary to maintain law and order in the tiny state. It fiercely rejected the experience of most countries in the world and repeated again old arguments which have been rejected, not only on moral grounds, but also from the experience of criminology which demonstrates that the death penalty is not an effective deterrent. Quite apart from its opposition vote, Singapore spoke with a voice of righteousness and even moral superiority. However, there is always a weak point in the Singapore position. If, as it claims, the death penalty is maintained as a deterrent, why must it be so secretive about it. Everything to do with the death penalty in Singapore, the number of those executed, the process itself, is kept secret; one would expect that deterrence would require publicity.
At last the veil has been lifted. In his book "Once a Jolly Hangman", Alan Shadrake reveals more than has ever been known about Singapore's death practice. His main source is an interview with the 'Jolly Hangman', Darshan Singh who was executor of about 1000 men and women in the grim Changi Jail.
Shadrake further researches the cases of several notable victims of the hangman and of some who escaped Singapore's vaunted judicial system. The truth emerges that Singapore executions do not follow a just judicial system. Especially where foreigners are involved, those with power and wealth can escape the gallows, the poor and ignorant are hanged until they die.
It is not a well written book. There is a lot of extraneous material. There are too many printing errors as if it was never proofread. But it performs a unique service in letting us see the horrible reality of hanging, typified in the assurance given by the hangman to each of his victims, the last words they ever heard,"I am sending you to better place than this". But it is the hypocrisy of the Government of Singapore which arouses the greater horror which effectively says to each victim "Singapore will be a better place without you", unless there are reasons of state to let you go your way.
"Once a Jolly Hangman" is banned in Singapore
Posted by hrdefender at 5:27 PM