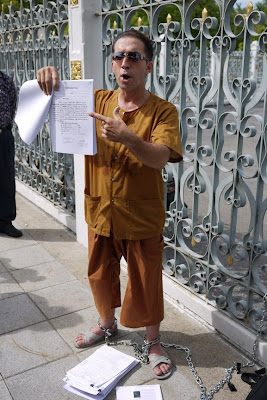 Shackled before Government House
On the morning of Tuesday 13th there appeared before Government House in Bangkok a 40 year old man in prison clothes, wearing shackles. His name is Benny Moafi, an Iranian and Swedish citizen; his legal campaign for prisoners on death row has already been recorded on this website. Benny has submitted the legal briefs against the permanent shackling of prisoners condemned to death. His case is a brilliant indictment of this practice and his arguments are based on Conventions of International Law ratified by Thailand, as well as on the Universal Declaration of Human Rights. It is the first time in Thailand that a legal case has taken this dramatic approach, and Benny's arguments were studied as a test case in a recent legal workshop organized by the International Commission of Jurists in Bangkok. The Administrative Court on 15th September 2009 gave a favourable decision in the case. Unfortunately, implementation of the Court Order has been blocked by an appeal against the decision by the Department of Corrections. During the long delay for the appeal decision, the prisoner, whose case is subject of the exemplary trial, remains shackled. Benny is following the course of the appeal. However, international interest in the case is growing, and in a recent meeting with ngo representatives the Minister of Foreign Affairs has promised redress.

Benny Moafi graduated in law while himself a prisoner. He has just been released on parole after ten years of imprisonment. He has fought innumerable legal cases and complaints on behalf of other prisoners, most of whom are too poor to pay for any legal representation. One prisoner remarked that the day when Benny was himself released from prison, a statue to him should be raised before each of the prisons in Bangkok where he has served. At present he is pursuing over 200 cases in the courts.

And now he has turned to his own case, to claim that he has been wrongly imprisoned for ten years on falsified evidence. The case is a maze of Minos and the wheels of justice turn ever so slowly. At last the patience of Benny is reaching exhaustion, ten years of his life have gone by and he has ambitious legal plans to implement, if he can be truly free again. He has addressed a letter to the Prime Minister calling attention to the injustices he has suffered, as is the right of any inhabitant of the Kingdom when all else fails.
This site wishes to honour this great campaigner for justice and to support the call for justice he is now making on his own befalf.

For further details on the protest of Benny Moafi see the link on the right.
Posted by hrdefender at 10:10 AM