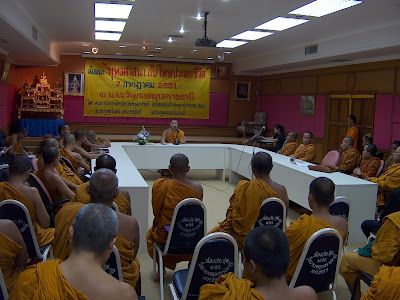 On 7th July, UCL organized the second of a series of seminars on religious aspects of the death penalty. The seminar took place in Wat Mahasawatnakphutaram of Ubon Ratchathani. 80 monks from throughout the province attended the one day seminar.

The topic was novel to most of the monks. Some were strongly in favour of abolition, others believed that the death penalty was karma due to bad actions; a middle group believed that a reform of society on Buddhist principles would make the death penalty superfluous. But all welcomed the opportunity to hear new viewpoints and discuss various aspects.

In summary, these monks subscribe to a basic Buddhist ethic. Good comes to those who do good, evil to those who do evil. If people listen to the teaching of the Buddha and follow the five basic precepts all evil will be eliminated from society. If not, they deserve their fate, including the death penalty. Nevertheless, compassion for oneself and others must be the basis of individual behaviour. There are unresolved issues in renouncing responsibility for the actions of government and society.