Muslim Perspectives on the Death Penalty 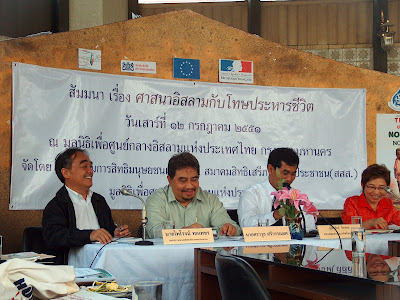 On Saturday 12th July 30 participants gathered in a seminar held in the Foundation of Islamic Centre of Thailand to discuss Muslim Perspectives on the Death Penalty. The position of Thai Muslims can be summarised in the statement of a Thai Muslim lawyer:
"Muslims cannot abandon the death penalty"
While this may appear to be an uncompromising stand there were interesting aspects to the seminar. Pairoj Pholphet, secretary general of UCL remarked that the occasion was unique, it being most unusual for Thais to exchange beliefs. There were expressions which suggest approaches to further discussion on the issue.
"Islam belongs to everybody, not just to Muslims"
"Punishment is between humans, not between God and man"
" There is a traditional belief that if punishment is evaded in this life, then it will come in the next"
"On the value of a moral act: A prostitute who gives water to drink to a dog may thereby earn heaven"

To Moslems the imported legal systems of the west found in most countries are not their affair, although such laws must be obeyed. They look to the establishment of a sharia system of law. Capitalism is a religion with its own morality where consumption and exploitation of others are part of an accepted moral code.
Posted by hrdefender at 6:36 PM