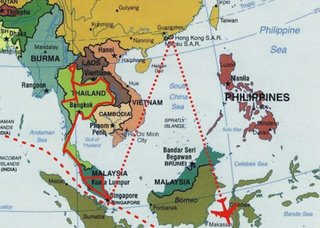 A move to abandon the death penalty in Malaysia would have momentous effect on its practice in Thailand, just as a similar move in Thailand would surely affect practice in Malaysia. It is with great interest that we learn of a statement by a Malaysian government minister favouring abolition.

Cabinet minister in charge of law supports calls for abolishing death penalty
A Malaysian Cabinet minister in charge of law said he supports calls for abolishing Malaysia's death penalty, which is largely used against drug traffickers, a news report said Tuesday. Nazri Aziz, minister in charge of law in the Prime Minister's Department, was quoted as saying by the New Straits Times newspaper.
Nazri was responding to an announcement over the weekend by the Malaysian Bar Council that it would campaign for abolishment of the death penalty.
Nazri and his spokesmen could not immediately be reached for comment. The Malaysian Bar Council said the death penalty is barbaric, inhumane and an insufficient deterrent for crime.
Malaysia is one of 76 countries which still impose the death penalty. It is mandatory for murder, certain firearms offenses and for trafficking in heroin, cocaine, opium and marijuana, and for offenses against the king. Possession of drugs is presumed to be trafficking.
The death penalty, which is administered by hanging, can also be imposed at the discretion of a judge for kidnapping, associating with people carrying arms or explosives and waging war against the ruler.
Since 1970, Malaysia has hanged 359 people, 40 of them in the last 10 years. Most were convicted of drug trafficking.
There are 159 prisoners on death row.
The Malaysian Bar Council has also called for an immediate moratorium on all death sentences pending amendments to the law.
But Nazri said that was not possible.
"The death sentence has been part of our laws for a long time. It goes with the fabric of the whole system. After discussions are held, hopefully the attorney general will advise the government", he said. (New Straits Times)
Posted by hrdefender at 8:31 AM