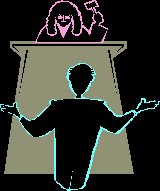 It is a commonplace of the death penalty that whether an accused is sentenced to death or not depends on the effectiveness of the defence lawyer. The case of an accused who must rely on a court appointed lawyer is particularly questionable. What is the criterion of diligence for a lawyer neither chosen nor paid by the defendent?
A recent decision by the US Supreme Court took an unusual initiative in overturning a death sentence in such a case:
WASHINGTON, June 20 - The Supreme Court overturned a Pennsylvania man's death sentence on Monday on the ground that his lawyers' failure to search his record for evidence that could have persuaded the jury to spare his life fell below minimum constitutional standards for the effective assistance of counsel....The point of contention among the justices in the case was the failure of defense lawyers to examine the file of a rape case in which the accused had been convicted 14 years earlier. The case was germane because the prosecution had announced its intention to use the case to show that the accused was a previously convicted violent felon, one of the "aggravating circumstances" on which the Pennsylvania death penalty law permits juries to rely in imposing a sentence of death.
Are justices in Thai courts aware of a duty to assess the effectiveness of defence lawyers?
Posted by hrdefender at 9:23 PM