Meanwhile in the land of the not so free: 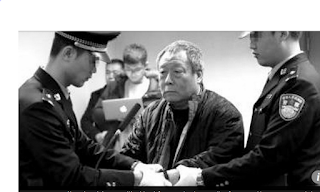 Beijing: Judge defends decision, saying executions to be carried out immediately will only be ordered in the most extreme circumstances or if there is a grave threat to public security

But the court suspended the sentence for two years, which meant he would be spared from execution as the penalty is usually downgraded to a life sentence automatically at the end of the suspension period.
Posted by hrdefender at 11:26 AM