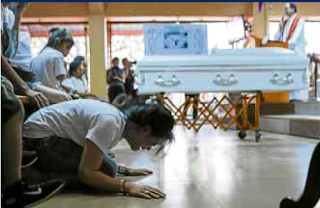 Luzyiminda Siapo dreamt of giving her children a better life when she left for Kuwait two years ago. But last week news from home, the kind nightmares are made of, sent the domestic running back.

On March 29th, a group of men in ski masks abducted and killed her 19-year old son Raymart a day after a neighbour tagged him as a marijuana peddler in Barangay NBBS, Navotas City.


“All it took was a false accusation for these people to murder my son,” Siapo, a single parent, said in an interview earlier this week. They did not bother to investigate, they did not bother to verify. “They just killed him”. The night before the murder, Raymart and a neighbour had a heated argument that ended with the latter going to the barangay hall to accuse Raymart of many things, like selling marijuana. The neighbour, ideentified only as Pejie, said his piece before desk officer Christopher Cariquitan who had everything recorded in his logbook.


The following night, aarmed men on motorbikes came looking for the teenager. An uncle who served as Raymart's guardian said over 14 men arrived and five of them entered their target's house. They couldn't find Raymart but later located him at a friend's house nearby.


Last cries for help
Forced to ride with the group, Raymart was last heard crying for help from anyone he saw on the street. They went around the barangay until they reached the area known as Bangkulasi.
The gunmen reportedly asked Raymart to get off the motorcycle and run. He wouldn't, and couldn't for Raymart was born with bilateral club foot (both feet were deformed).

“When my son refused, they asked him to sit down instead. Then, they shot him. Just like that, Stapo said.

There s no name for her pain 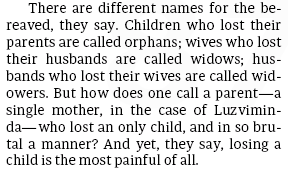 Posted by hrdefender at 8:28 PM