Gunmen carry out Duterte-inspired killings of suspects in 3 provinces 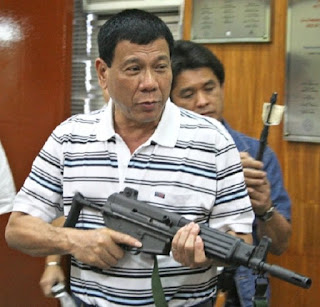 Duterte cannot even wait until he is legally installed as President

ILOILO CITY—Five bodies in three provinces in three days.Five men, including a lawyer, fell victims to what appear to be cases of summary execution in Iloilo, Negros Occidental and Negros Oriental from Thursday to Saturday. The killings came as President-elect Rodrigo Duterte, who told police to get drug suspects dead or alive, prepared to assume office at the end of the month.

All share one thing in common—being suspected of involvement in crimes, including the illegal drug trade.
In Negros Occidental, a suspected drug supplier in the northern part of the province was killed by two motorcycle riding men in Calatrava town.
Habib Into, 49, of San Carlos City, who died of multiple gunshot wounds, was at the top of the list of most wanted drug suspects in San Carlos City and other areas, said Supt. Jacob Crisostomo, San Carlos City police chief.
Some 10 grams of shabu and P21,000 in cash were found from Into, police said.
A few hours later, a body was dumped by still unidentified men in Barangay Zone 15, Talisay City, also in Negros Occidental.
The victim, identified as Jeffrey Buencuchillo, 33, was tied and suffered multiple gunshot wounds. His hands were cut off.
Police found in the crime scene a cardboard with a message that read: “I am a member of Akyat Bahay, a thief, an addict. Don’t follow my example because you will be killed next.”
In Negros Oriental, a lawyer was killed while he rode a tricycle to a pension house in Barangay Looc, Dumaguete City, around 10:20 a.m. on Friday.
Rex Agan Perewperew, 38 and a native of Siquijor, was also shot by motorcycle-riding men. He suffered three gunshot wounds in the back.
Police said Perewperew is being investigated for alleged involvement in drugs. He was out on bail for violation of the Comprehensive Dangerous Drugs Act of 2002.
In Iloilo, two men with criminal records were separately found dead with gunshot wounds on Saturday.
The body of Sherwin Taasan, 38, was found by a village watchman around 5:45 a.m. on a grassy lot in Barangay San Vicente in Leganes town, some 11 kilometers north of Iloilo City.
Insp. Gerry Leones, Leganes police chief, said Taasan had six gunshot wounds, including two in the head.
He was found with his hands tied behind his back with a black shoelace.
Taasan, a resident of Barangay Rizal PalaPala II in Iloilo City, had been arrested several times for snatching, Leones said, citing accounts from his live-in partner.
He is also facing a murder case.
Rotchel Navales, common-law wife of Taasan, said Taasan was on board a jeepney bound for Molo District when two armed men flagged down the vehicle and handcuffed him.
“The two said they were police and my husband has a warrant (of arrest) and they handcuffed him,” she told investigators at the Leganes police.
Navales said Taasan was involved in petty crimes and was once a drug user.
“Even though he was a thief, they should not have killed him. We have small children,” said Navales who has seven children with Taasan.
In Iloilo City, a 33-year-old ex-convict was found dead with 11 gunshot wounds around 3 a.m. in Barangay San Jose in Villa Arevalo District also on Saturday. His hands were tied behind his back with a packing tape. Police identified the victim as Lou Facto, a resident of Barangay Sooc, Villa Arevalo. Facto had been recently released from detention for an illegal drugs or firearms case, according to PO2 Rhizan Magoleño, of the investigation section of the Arevalo police stationD.

Posted by hrdefender at 3:00 PM


Everything is fine, am happy about your blog. Thanks admin for sharing the unique content, you have done a great job I appreciate your effort and I hope you will get more positive comments from the web users.