Secrative and Meaningless Executions in Japan 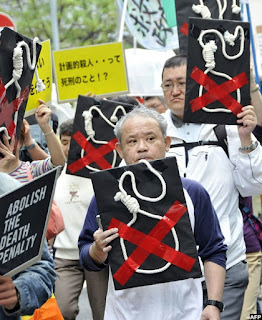 
Convicted murderers Yasutoshi Kamata and Junko Yoshida were executed by hanging, bringing the total number of people put to death since Prime Minister Shinzo Abe came to power in 2012 to 16.
Yoshida, 56, killed two men in the late 1990s as part of a plot to obtain insurance money, the justice ministry said. She is the fifth woman to be executed in more than 60 years.
Kamata, 75, was convicted of murdering four women between 1985 and 1994 -- and a nine-year-old girl who started screaming as he tried to sexually abuse her.

Justice Minister Mitsuhide Iwaki, who authorised the executions, said they had committed "extremely heinous" crimes that "took the precious lives of the victims for very selfish reasons".


1.       The death penalty is subject to a UN General Assembly vote in favour of a worldwide moratorium
2.       One of those executed is a woman; the execution of women is particularly repellant
3.       The other was 75 years old, exempt from execution even in countries that retain the death penalty
4.       Those condemned to death in Japan are held in solitary confinement for decades and then executed without advance notice.
5.       Two executions in Malaysia, two in Japan, …….