Mary Jane Veloso, we remember you 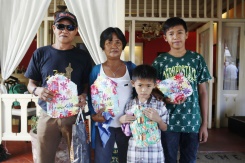 Mary Jane, a happy birthday
"Mary Jane Veloso was reunited with her parents and two children at a prison in Yogyakarta two days after her birthday, where they presented her with gifts and letters from her supporters in the Philippines.
The 31-year-old was granted a temporary reprieve in April just moments before she was due to be executed alongside eight other convicted drug traffickers, including seven foreigners."

The care of a women for her children and parents is one of the treasures of humanity. It must not be wasted by a meaningless and legally dubious sentence of death.
Posted by hrdefender at 8:52 PM