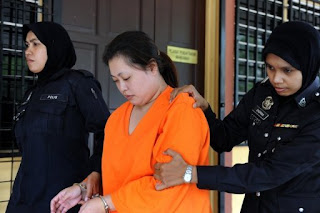 KUALA LUMPUR – Malaysia’s highest court has endorsed the death sentence issued by a lower court for a 41-year-old Japanese woman over trafficking 3.5 kg of methamphetamine into the country, a source said.

The decision Thursday by the Federal Court of Malaysia in Putrajaya confirms the capital punishment ruling for Mariko Takeuchi, rejecting her appeal, according to the source.
Takeuchi had pleaded not guilty, saying she did not know what was inside a suitcase she brought in on a trip from the United Arab Emirates. She may seek a pardon from the king.
Takeuchi, a former nurse, had around 3.5 kg of methamphetamine hidden in the suitcase she brought in from Dubai to Kuala Lumpur in October 2009, according to a ruling by the Court of Appeal in March 2013.
Possession of a minimum of 50 grams of methamphetamine is considered to be trafficking in a dangerous drug and punishable by death in Malaysia.
Japan Times October 16

Death Penalty Thailand deplores the execution of women for reasons to be treated extensively on this site. In the whole modern history of Thailand three women have been executed and a Thai government official announced at a conference on the death penalty that "Thailand does not execute women".
The execution of women is repugnant and serves no purpose.
Posted by hrdefender at 10:22 PM