The Shame of Botched Executions 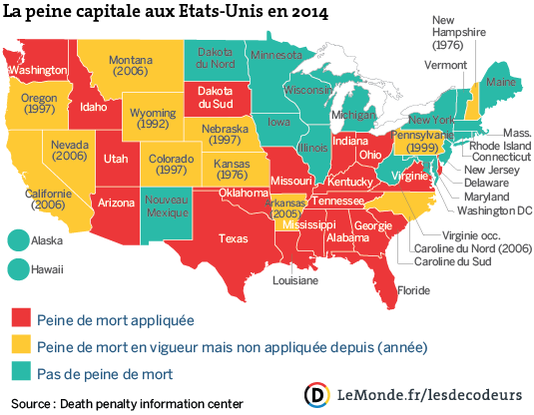 The US state of Oklahoma was the first to introduce lethal injection in 1974. The method was considered a final solution to the problem of making inflicted death painless. Many of us have experienced surgery under total anesthetic, when it seemed that only a few moments of consciousness preceded oblivion to further suffering. Why is it that the most technically evolved nation on earth is making a botch of executions and causing intense suffering to those subject to lethal injection? The response given is that countries in the European Union which manufacture ingredients of the triple cocktail used to induce death are no longer willing to engage in the awful business of judicial killing and deny the supply. And what of the immense resources of the US itself and its flock of Nobel Prize winning chemists?
Example of botched executions
Clayton Lockett, 38 years old, was condemned to death in the year 2000 for the rape and murder of a young woman. In spite of several appeals against the conviction his execution began at 18.23 hours in the state penitentiary of Oklahoma, with a first injection. At 18.33 he was declared unconscious and the following two chemicals were injected.
Three minutes later the condemned man began to move, breathing heavily, clenching his teeth and trying to raise his head. He was heard to say the word “man”. At 19.06 he finally died of a heart seizure.
The New York Times suggested that in view of the failure of the sedative given in the first injection he would have suffered suffocation and atrocious pain. In the makeshift execution procedures that follow the US adoption of lethal injection as the method used in all executions, there have been several botched executions. Lethal chemicals are being sourced from unapproved manufacturers, and records of purchase destroyed to avoid investigation.
Many reject the death penalty on the basis of an appreciation that all life is sacred, and that punishment should never be reduced to vengeance. The fact that it appears impossible to avoid execution that avoids extreme pain may convince others that Capital Punishment is a barbarity that we must not tolerate. There are many arguments against the death penalty, primarily the undoubted execution of the innocent, and the argument that while legal systems that are inevitably defective, death is an absolute. As was remarked hundreds of years ago, the executed remain guilty for ever.

Vietnam has already experienced a botched execution following the use of inadequate lethal chemicals. Thailand has adopted lethal injection after tuition in US practice. This will inevitably lead to botched executions that plague the mentor country. Nor is it acceptable to return to the barbaric machine gun of the past which, on occasion, also encountered horrific failure. Stop now, there is no guarantee of painless death.
Posted by hrdefender at 6:28 PM

It is great to have the opportunity to read a good quality article with useful information on topics that plenty are interested on.