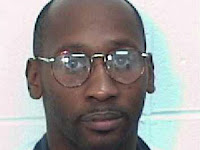 On 21st September 2011, at 23h08, in Jackson, Georgia, the 42 year old Afro-American, Troy Davis, was put to death.
In 1991 he was condemned to death for the murder of a white policeman in 1989. There was no physical evidence that he had committed the crime, nor was the weapon ever produced. His condemnation followed the evidence of 9 witnesses who identified him as the murderer. 7 of these witnesses later retracted their evidence, some of them saying that their evidence was given in response to police persuasion. The identification parade was carried out in a way which is no longer tolerated; before seeing the parade, the witnesses had been shown a picture of Troy Davis, and told that this was the man they were expected to identify. Study of witness by identification parade is now known to be a very flawed process.
The standard of evidence in the trial is far short of the standards for capital punishment. In all probability Troy Davis is innocent.
Execution was delayed for four hours until the Supreme Court ordered the lethal injection to proceed. President Obama declined to intervene.
Before he died, Troy Davis declared that the movement to abolish the death penalty will go on. Indeed it will, Troy. This case has shocked many, and may well prove decisive in leading to abolition. In passing, one may pity the wife of the slain policeman who declares her satisfaction that vengeance is achieved.

Comment by Robert Badinter who abolished the death penalty in France
- a judicial assassination
- a stain on US history
- a defeat for humanity
A man has been kept on death row for 20 years; a punishment considered cruel, inhumane, and degrading by the European Court of Human Rights
Posted by hrdefender at 5:22 PM