Execution of three Filipinos on drug charges in China 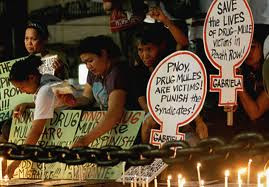 On Wednesday 30th March 2011, three Filipinos, Sally Ordinario-Villanueva, aged 32; Elizabeth Batain, aged 38, and Ramon Credo, aged 42 were executed by lethal injection in China. They were charged with smuggling heroin weighing 4 to 6 kilos into the country. By Chinese law the smuggling of a quantity exceeding 50 grams is subject to the death penalty.
Pleas for clemency made by the President of the Philippines were rejected by Chinese authorities.
In a statement made by a spokesperson of the Chinese government:
"In China, our judicial authorities handled the case independently and we grant equal treatment to foreign drug traffickers. The involved individuals rights and treatment are ensured and safeguarded according to the law. China has fulfilled its international obligations in the process.”
This is not so. In international law the death penalty may be inflicted only for the most serious crimes which is interpreted as intentional homicide. The UN Human Rights Council has insisted that drug related crimes do not come under the ambit of “most serious crimes”.
China must not deny the experience of most countries in the world, nor the shared moral sense of the majority in rejecting the death penalty

The three executed were drug mules recruited by foreign drug syndicates preying on jobless Filipinos, not professional drug dealers. In one of the cases there is doubt that the carrier was aware of the nature of the carried package. They appear to have been first time offenders.
They carried the drugs through an ineffective surveillance in Manila International Airport, a process which must be investigated.

The three condemned Filipinos were allowed to meet with their families for one hour before execution. One of the three was unaware that the visit was a prelude to her execution, and her family tried to hide from her the significance of their visit.

The drug trade is the largest crime problem in the world and cannot be solved by the death penalty. The Chinese government should study the case of Hong Kong where the death penalty has not been used in 40 years and where the drug problem is no different than in the comparable city of Singapore, which surpasses even China in its rate of execution per population unit (Evidence may be found on an earlier posting on this blog: See Archives; December 2008)

Many other Filipinos are under death sentence in China and elsewhere. The death penalty has been abolished in the Philippines for the last nine years.
13 Thai women are awaiting execution on drug charges in China
Posted by hrdefender at 11:43 AM