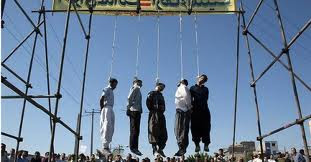 Iran is considered an Asian country, located on Asia’s Western border. As such it is on ‘The Next Frontier” where the death penalty plague still rages.
.
(Paris, 16 February 2011) – Other nations and the UN should speak out against a wave of executions in Iran, the Nobel Peace Laureate Shirin Ebadi and six human rights organizations said today.
At least 86 people have been executed since the start of 2011, according to information received by the six organizations. At least eight of those executed in January were political prisoners, convicted of “enmity against God” (moharebeh) for participating in demonstrations, or for their alleged links to opposition groups.
The increase in executions follows the entry into force in late December 2010 of an amended anti-narcotics law, drafted by the Expediency Council and approved by Supreme Leader Ayatollah Ali Khamenei. Officials have also vowed to step up enforcement measures against drug trafficking. Sixty-seven of those executed in January had been convicted of drug trafficking. The true number of executions may be even higher, the groups said, as there are credible reports that some executions that are not officially announced are taking place in prisons.
The recent executions also raise fears for the lives of two men, Saeed Malekpour and Vahid Asghari, believed to have been sentenced to death by Revolutionary Courts following separate unfair trials in which they were accused of “spreading corruption on earth.”
Iran executes more people than any country other than China. The hundreds, if not thousands, of prisoners currently on death row may include more than 140 who were under the age of 18 at the time they allegedly committed their offence. International law prohibits the execution of persons for offences that they committed while under 18.
In many cases, lawyers of those sentenced to death are informed of their clients’ executions only after they have taken place, despite the legal requirement for 48 hours’ notice.
Posted by hrdefender at 8:22 PM