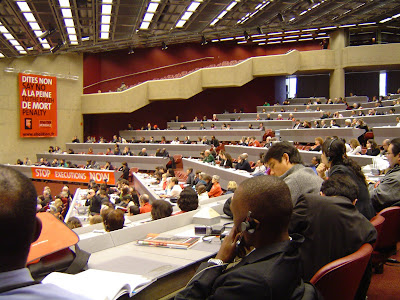 Say No to the Death Penalty

The 4th World Congress for Abolition of the Death Penalty opened in the UN Palais the Nations in Geneva on 24th February and ended on 26th February.
1,700 men, women, and children gathered from all over the world. Those from countries which retain the death penalty told their stories which were sad to tears, but also full of hope for the end of this ancient curse which is recorded from the beginning of our history. Others, from countries where the death penalty has been abolished, came to give their support. Sometimes, they recalled with regret that the death penalty was a legacy of colonialist times, which somehow persisted when other liberties were achieved. Or, they came to acknowledge that the death penalty was an inheritance of the past which affects us all; as expressed so movingly in the words of John Donne, “The death of any man diminishes me”. All are united in the movement for abolition, which has become a worldwide tide of hope. The number of abolitionist countries continues to rise, now reaching 140. On the other hand, not only do the countries retaining the death penalty decrease in number, but in many of the others, even in the most brash in claiming the right to execute, the number being put to death is decreasing each year. A growing optimism pervades the movement for abolition. From the timeline of executions worldwide, one scholar predicted that it will all be over by the year 2025. It is even possible that rejection of the death penalty may reach a flood and achieve total abolition by 2015. What country would dare to be the last place on earth to exercise the awful trade of judicial execution, or to be identified as the homeland of the last person ever to be executed, whose name will surely be remembered for ever to the shame of humankind?
Posted by hrdefender at 8:36 PM