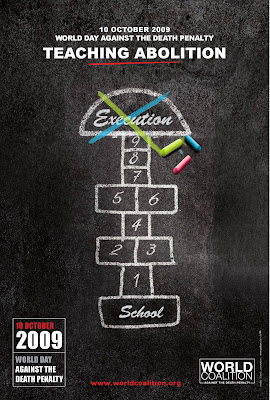 10th October is the day when those protesting the death penalty throughout the world raise again the issue of this ancient barbaric curse in a minority of states. The majority of the world has already rejected this form of legalised murder, most recently Brazil, 139 countries in all. Thailand remains among the minority who still think it a right of the state to punish by death.
It is a morally repugnant punishment, it is useless and ineffective, and devalues the humanity of all of us. Let it end forever.
This year the objective of the World Abolition movement is to introduce abolition to the young, especially 13 to 18 year olds. It is the responsibility of this generation to see the end of Capital Punishment.
Posted by hrdefender at 10:11 AM